I fell asleep watching X-files, as usual. A typical later night at work leading to bed at 3am. I was startled awake around 4am by shadows racing overhead. I was disoriented and confused, jumped out of bed and turned the light on. As my eyes focused to the light and flicker of the X-files menu screen I noticed a large bat flying around my bedroom. Alarmed and haunted by the X-files theme song playing in the background I started to panic about bat bites. I realized that I did not know much about bats so I closed it in my bed room and googled them. One of the things that stood out in my half slumber was rabies. There seemed to be no quick online suggestions about how to get a bat out of your bedroom. I tucked myself into the hallway bathroom and worked on a game plan as I began to wake up. The best idea I could come up with was to try and get the bat into one of the unused bedrooms, open the window, shut it in and hope it flies out of the window on its own.

I chose my b 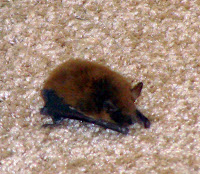 edroom, opened the windows and began the daunting task of trying to encourage the bat to fly into that particular room. It was on the wall of my bedroom and I began tossing things in the bats direction (pens, tato toys, and any other small objects I could find). The bat seemed to get very irritated and was spinning aorund the room to the hymn of the X-files theme still playing in the background. After nearly an hour of throwing random objects the bat finally flew down the hall into the desired bedroom.

The next hour was spent trying to encourage the bat to go out the window. Ironically, the bat sat on the windowsill of the unopened window for about 40 minutes. Eventually, I just shut the door, stuffed a towel under it and went to bed.

Four hours later I woke up to see if the bat had flown out of the window. It had not. It seemed to be asleep on the floor (or dead). At this point, I was on the phone with Ashley who I had plans with today (remember? Hawks vs Suns!). She said she was in the area and headed over to help me with the bat issue. When she got to the house we tag teamed the bat who was apparently sleeping. She was fearless and put a plastic bucket over the top of the bat. I slid a piece of cardboard under the bucket. Then we took the bat outside and set it in the leaves. Done deal. The kinks of a formerly vacant house. 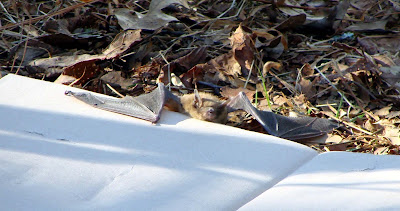 OH my gosh! I would have freaked! Glad you got him out safely. He's really cute!

Oh poor bat, I feel so sorry for him. He is probably very sick, most likely rabid. They never normally do things like this unless they are pretty far gone. But hopefully I'm wrong, maybe he was just exhausted after his ordeal.

The last time I was in the states my dog and I had a run in with a bat. I called the vet to see if there was anything I should do (she had her rabies vaccines, so no, and the bat was dead) and he said that in most cases where this happened the bats did have rabies.

This is incredibly creepy, especially since the xfiles theme song was going. Yikes.

Aw, poor bat and poor you! At least he lived though. I had a similar experience a few months back, except with a sparrow, and one of my cats killed it. :( I mean, kuddos to the indoor domestic cat for finding some instincts, but I really wanted to save the poor bird. I'm glad you guys managed to get it out safe and sound!