The measurement of a chocolate success.

How do I measure success?  Well, I suppose, if it is simply for me or people close to me, as long as it tastes good, it is a success.  If that is the measuring stick, then certainly, my recent cake attempt was a brilliant success.  However, if the standard is an aesthetically pleasing and well constructed cake, I failed.

The cake was baking well but my failure as a baker shined through when it came out of the pans in pieces.  Since I have a lot of experience piecing cakes back together I was able to place them in relative togetherness, enough to ice.  The icing held the pieces together enough for a few pictures and some tasty slices of cake but no doubt about it, this cake was a train wreck.  A tasty, sugar infested, chocolate train wreck. 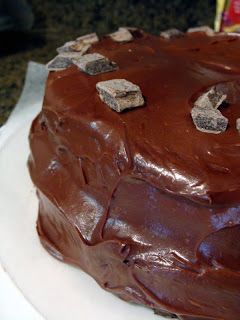 I have 3 days off!  I am pumped. I hope I find the motivation to get some things done.  If I do not end up doing anything, I think I will be fine with just a relaxing time off as well.

I took a look at some houses this morning and have a Real Estate things I will be taking care of over the next few days.  When I got home this afternoon, I made some of my chicpea chicken salad.  It is such a nice summer treat.  Makes for a great lunch! 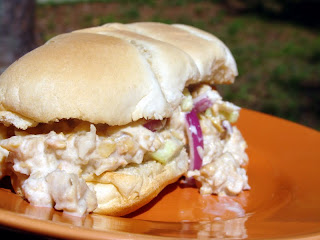 Thursday was a nice morning off.  There was some thrifting involved and a nice lunch.  Ashley had come over for the afternoon and we made some smoked pinto beans and a nice side dish.  This corn side dish was such an excellent compliment to the pinto beans.  It was light and sweet and really mellowed out the heavy beans.  It was also gorgeous.

This will certainly be a steady addition to any of my Mexican dishes.  It was really fresh and refined. 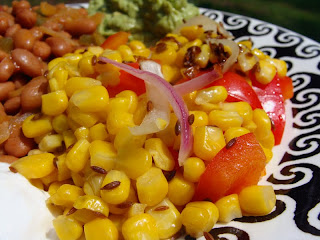 
Th final plates made for a nice lunch.  A little heavy for the harsh Atlanta summer weather but still great for sitting inside, enjoying the air conditioning. 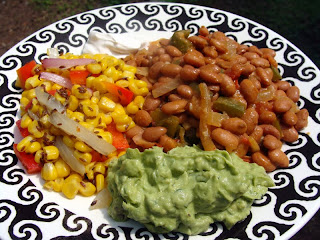 I can not believe that I forgot to post the big event from last Friday's day off.  Ashley taught me how to make lasagna!

As a kid, I was never a fan of cheese.  On the rare occasion that my mother would make a lasagna, I would refuse to eat any.  In fact, I do not think I ever even gave it a chance.  I avoided it like canned vegan meats.

A few weeks ago, Ashley made me a lasagna to have for work.  It was a great and perfect for my lunches.  It got me thinking about making my own but I requested her help.  I had never assembled one and she seemed to have it down.

We made a huge one and I ate it for the whole week at work.  It had a special layer of portobello mushroom, fried with fresh thyme, oregano, and basil and pureed.  It was a great added flavor that threw the whole meal over the top.

The "cheese" layers were packed with all kinds of fresh vegetables.  It turned out great and satisfied the carb needs of being at work while providing some solid nutritional value from all the fresh veggies.  This will certainly be on the menu for future lunches and might even get a recipe feature. 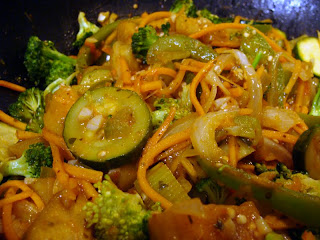 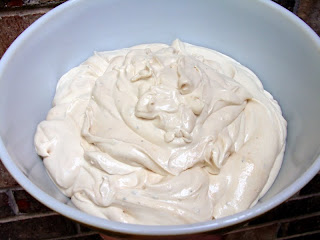 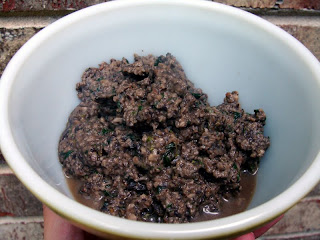 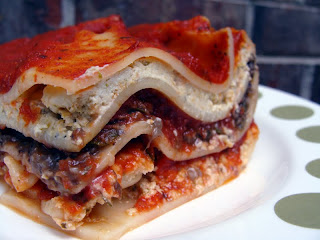 I have found that since becoming a homeowner, I really dislike painting, especially alone.  In fact, I dislike it so much so that I have left raw drywall all over my house just to avoid painting.

Friday, Ashley recommended that we paint one of the bedrooms in my house.  While not thrilled, I realize that it needed to get done so we headed out to get paint.

It turned out well, if uneventful.  It is certainly good to have another room completed.  Maybe now I will start looking for roommates. 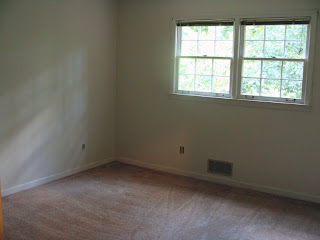 After painting, we had some lunch.  Always a staple, we had burritos topped with some vegan sour cream and guacamole.  It was a nice lunch after a hard afternoon of painting. 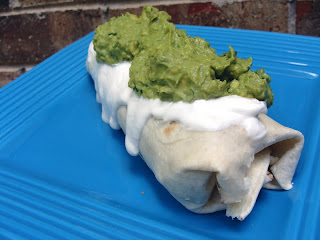 I opted to spend the day off with Ashley and had a tentative plan to relax at the house and enjoy the A/C on this hot day.  It turned into a day of business from start to finish.  It actually felt good to get a lot done.

Ashley recently got into the running for acceptance for a competitive program at her school.  We used that as an excuse to celebrate and get some great vegan cake!  I also made some strawberry ice cream to go with the cake.  If you have an ice cream maker, this is incredibly easy. 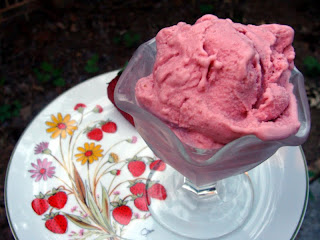 Use the most high fat content coconut milk you can find.  This will give the ice cream a deeper, richer flavor.


There is not much better way to celebrate than with cake an ice cream!  We also got several other things done, painting, more cooking, etc. 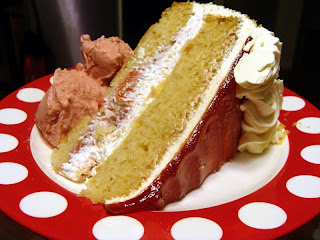 It is too hot.

The heat has been unpleasant recently.  Not even a large portion of watermelon or the nearly 2 gallons of water a day that I drink seems to be able to keep me cool and hydrated.  I really dislike the Atlanta summers, it is difficult to find the motivation to cook.

Fortunately for my belly, I push through the heat and cook.  Daily.  Not always healthy items but I always seem to eat.  I have also been staying true to bringing food with me to work.  In fact, recently I made a nice stir-fry that I was able to tote along with me to work as leftovers!  Of course, I used my own stir-fry sauce recipe. 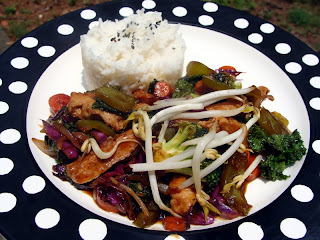 Watermelon has always been one of my favorite foods.  I can remember it being a treat in the summer to sit on the back deck and eat slices while letting the juice run down my chin.  My stepbrother and I would even have seed spitting contests.  When I was living in Denver, watermelon became part of the bedtime routine for me.  I think this was actually the birth of my bedtime snack.  I would sit in bed and eat a massive bucket of watermelon.

Now, I eat it as often as I can and try to come up with creative ways to use it.  Recently, I can up with a fun drink.  It was refreshing and the flavor combination was nice. 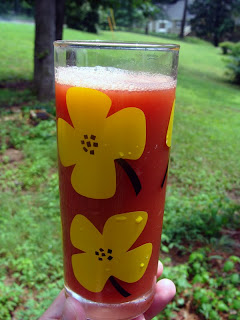 
In a blender, puree all ingredients until smooth.  This drink is much better if served very cold.  Chill for at least 30 minutes
at 12:30 AM 2 comments:

I may have finally got some inspiration back with regards to cooking.  I have been involved in kitchen related activities more!  I still wish I had more opportunity to cook for or with other people but I will take it where and when I can.

In another attempt to liven up the salad scene, I pulled together another fun dressing.  This one is vinegar-free.   Although it is hard to believe, there seem to be people out there that do like vinegar.  If I can keep making creative and tasty dressings I will make it through the outrageously hot Atlanta summer. 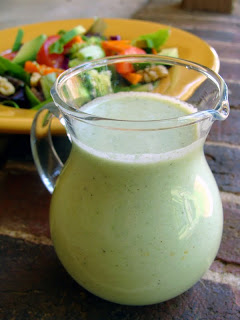 Puree all ingredients in a blender until smooth.  Chill for 30 minute prior to serving.  This makes enough for about 5 salads and should last several days.
at 9:29 AM 3 comments:

I seem to always forget to make a post on the actual date but sometime in the middle of June was my vegan anniversary.  I have been officially vegan for over 13 years now.  Some people hear that and their eye just about pop out of their heads in surprise while others scoff and tell me about their 25+ years of veganism.  Either way, it is something I am pleased with and I do can not see a reason to change. 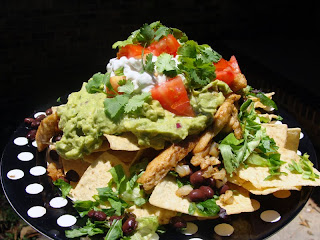 In the recent salad craze, I have been trying to come up with some nice summer dressings.  I find salads to be a bore much of the time so I have been making every attempt to  liven them up.  Sometimes I go into the salad dressing section at high end grocery story just to get some ideas.  This last one was fantastic, it was rich and creamy with a nice subtle flavor that did not over power the raw veggie salad. 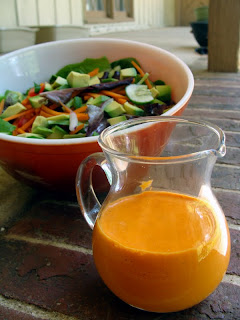 Pre-heat the oven to broil.

On a baking sheet, add the red pepper and allow to broil for about 8 minutes.  After 8 minutes, the top should be blackening.  If so, rotate and broil again, repeating this process until all sides are beginning to blacken.  Depending on the oven, this may take longer than 8 minutes so keep and eye on it.

Once the pepper is blackened, remove it from the oven and place it in a plastic bag for about 15 minutes.  This will allow it to steam and the skin of the pepper will be loosened.  Once the pepper has steamed, gently peel and discard the skin.

Cut the pepper in quarters and remove the seeds and ribs.  Add the pepper pieces to the blender with the garlic cloves and oil.  Blend on high until relatively smooth.  Add the remaining ingredients and blend until smooth.  This may take several minutes.  Chill for 30 minutes prior to serving. 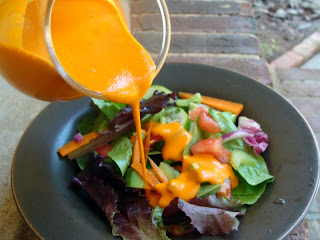 It seems that after months of searching the thrift stores, I finally found a good container to use for salad dressing picture.  Well, actually, if I am honest, Ashley found it and gave it to me.  It was a nice gift.
at 2:37 PM 3 comments: