Mushrooms are for Kids!

Every Thursday, Kaleigh and I have some great one-on-one time.  For weeks, we have been destroying mushrooms every Thursday.  A while ago I proposed the idea of portabello mushroom BBQ sandwiches.  She seemed curious. 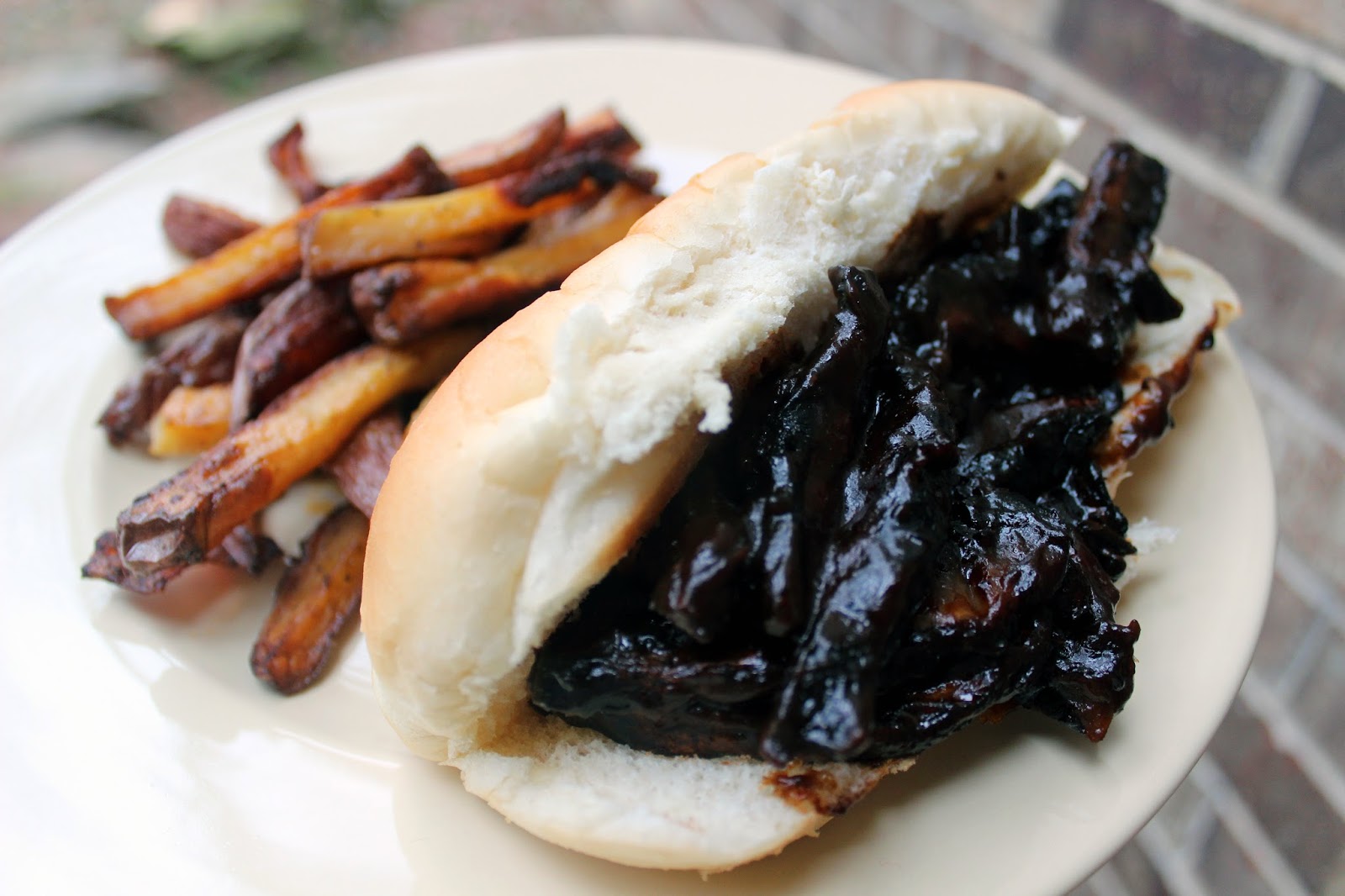 This time we made it happen.  She completely devoured her sandwich.  She loved it.  We took some portabello caps, sliced them, tossed them with onions, spices, and a gluttonous amount f BBQ, then roasted them until all the sauce was in the mushrooms!  After piling it on a toasted hoagie bun and adding a side of my homemade fries, we had an amazing meal!

For her birthday, Kaleigh got a super cool cooking kit for kids.  It has a kid friendly knife, peeler, etc.  It even has an apple slicer!  She is slicing her own apples! 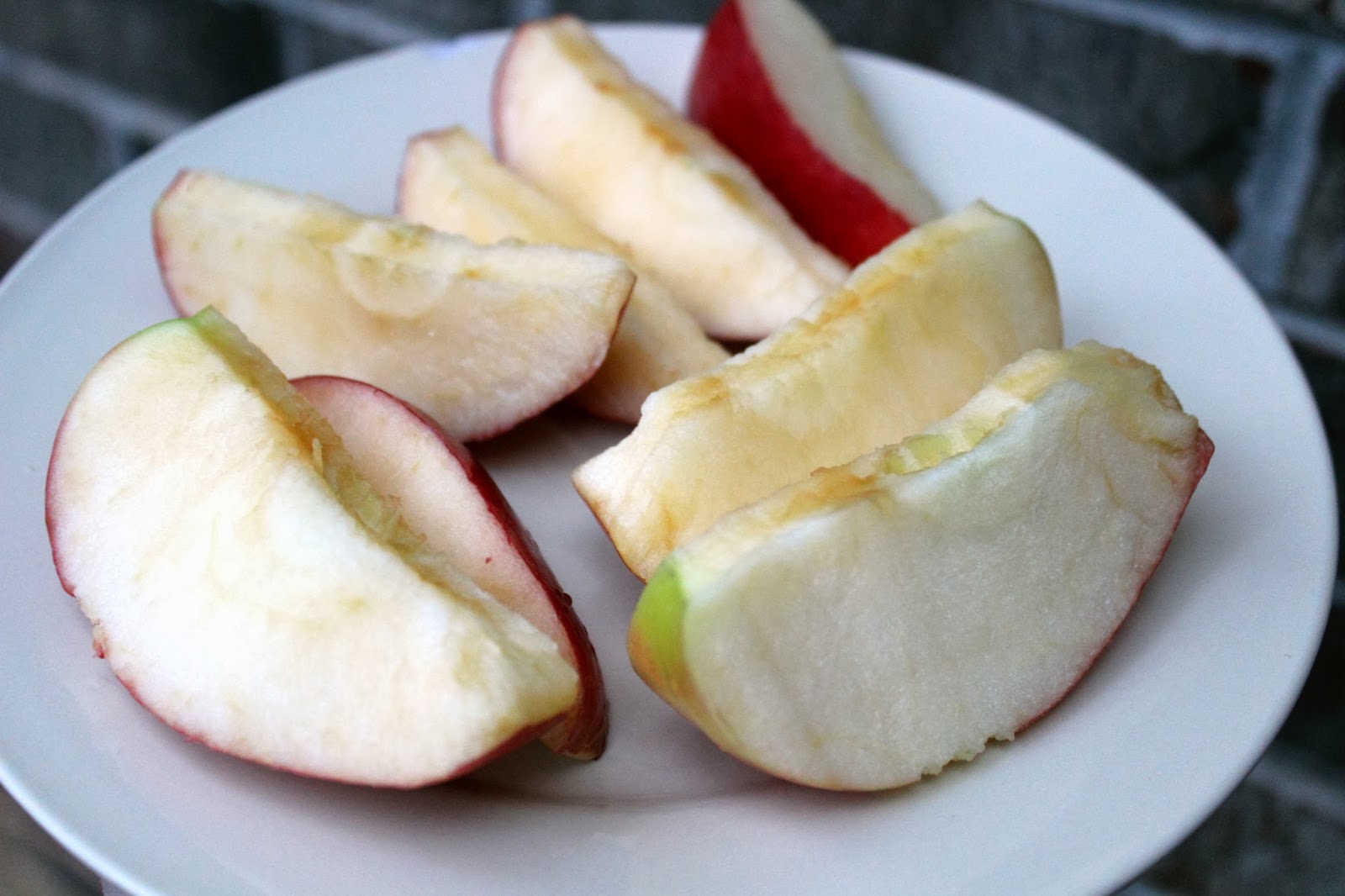 The other day I made another batch of my jerky.  It came out as good as the first and I am beginning to get a really good level of consistency on the flavor and texture.  There are still a few more improvements I want to make with both before I offer to share. I had a few spare pieces that did not get dried into jerky so I fried them with some peppers and onions and threw them in a sandwich for Ashley's lunch. It turned out really good.  With so few decent vegan jerky options, I may have an opportunity to sell the product once perfected. 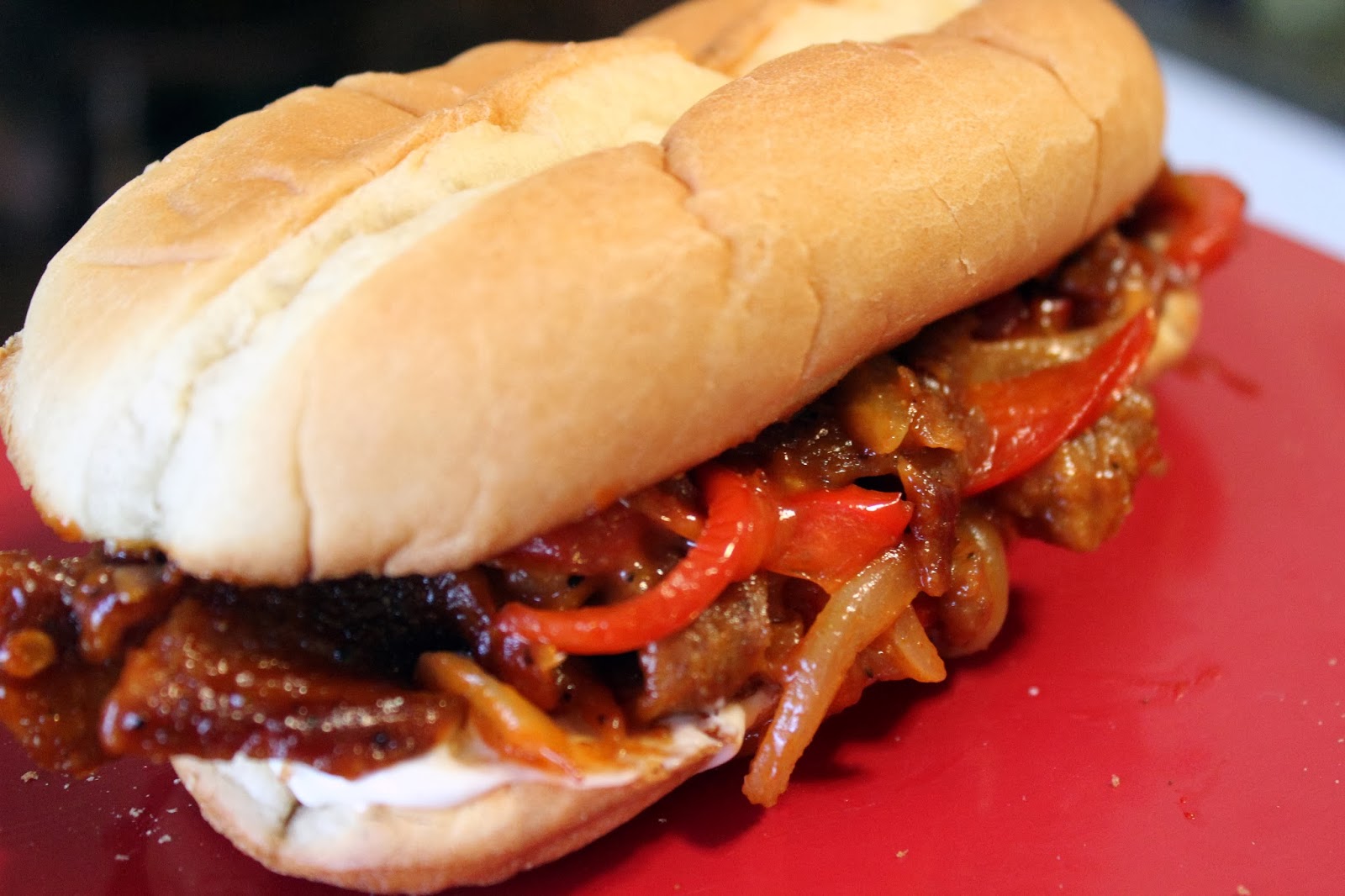 Kaleigh had her first school dance!

Kaleigh's school was hosting a Valentines dance.  It was actually the week after Valentines day due to the nasty Atlanta weather.  She asked me to take her and I agreed.  This would be interesting.  My school dances generally resulted in the cops being called due to the actions of my friends and I. 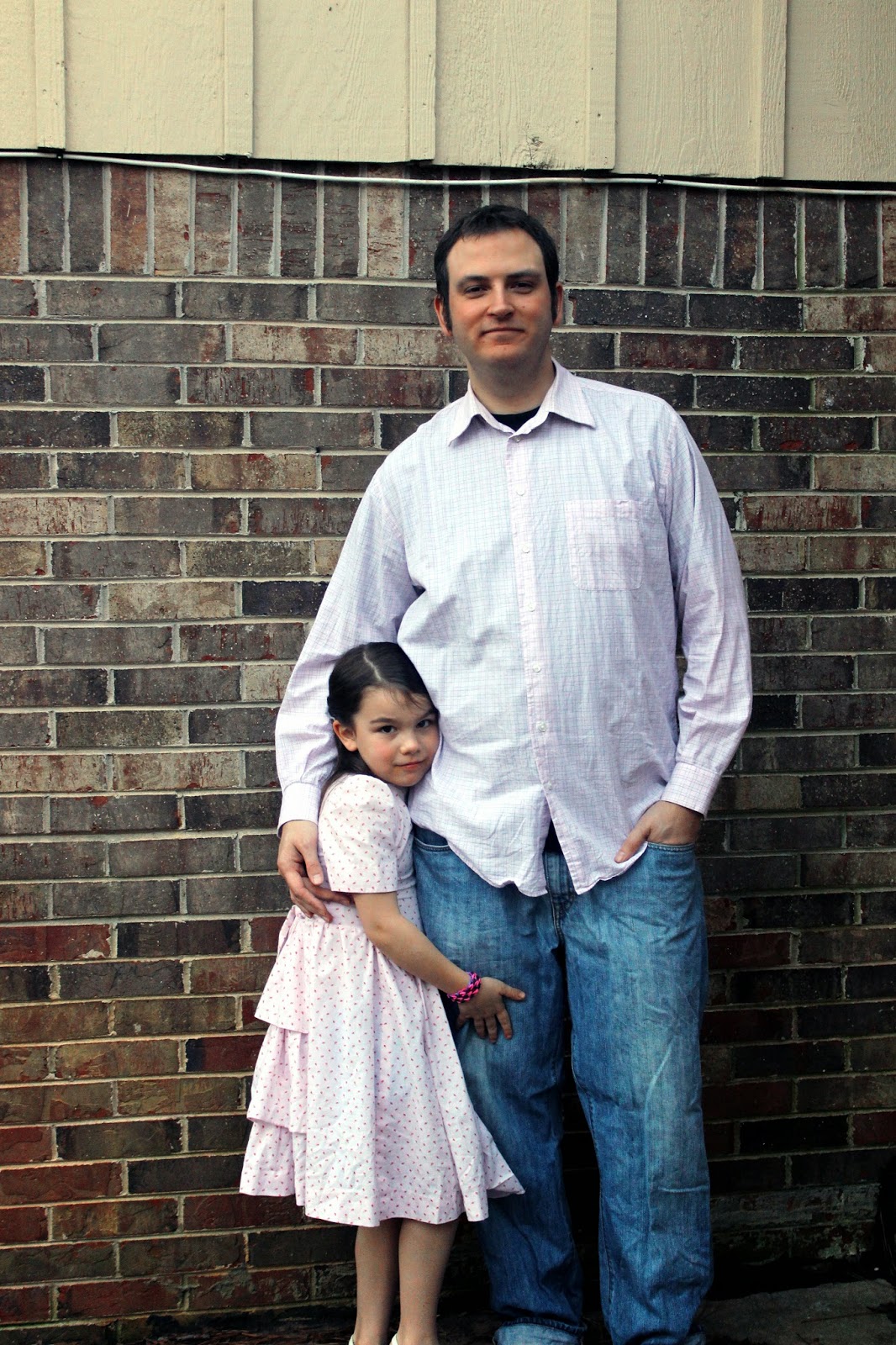 She got dressed up and informed me that I needed to as well.  I do not dress up much but I at least put on a clean pair of pants and a button up shirt.  Then, after Ashley took a few pictures of the two of us, we headed out.  She mainly played with her friends while I sat around but she did ask me to dance with her once.

For me, sometimes being put in a situation where there are parents makes me wonder if I am really able to help Kaleigh be a reasonable adult.  She had a lot of fun at the dance though so I guess I did ok.  Despite feeling out of my comfort zone, I did really enjoy getting to see her have so much fun (I even got to dance with her once!).
at 11:12 AM 1 comment:

Our first Valentine's Day since moving in together, Ashley, Kaleigh and I had a good albeit low key celebration.  Kaleigh and I surprised Ashley with some cards, chocolate covered strawberries, iced sugar cookies, and flowers.  Ashley took the two of us out for doughnuts! 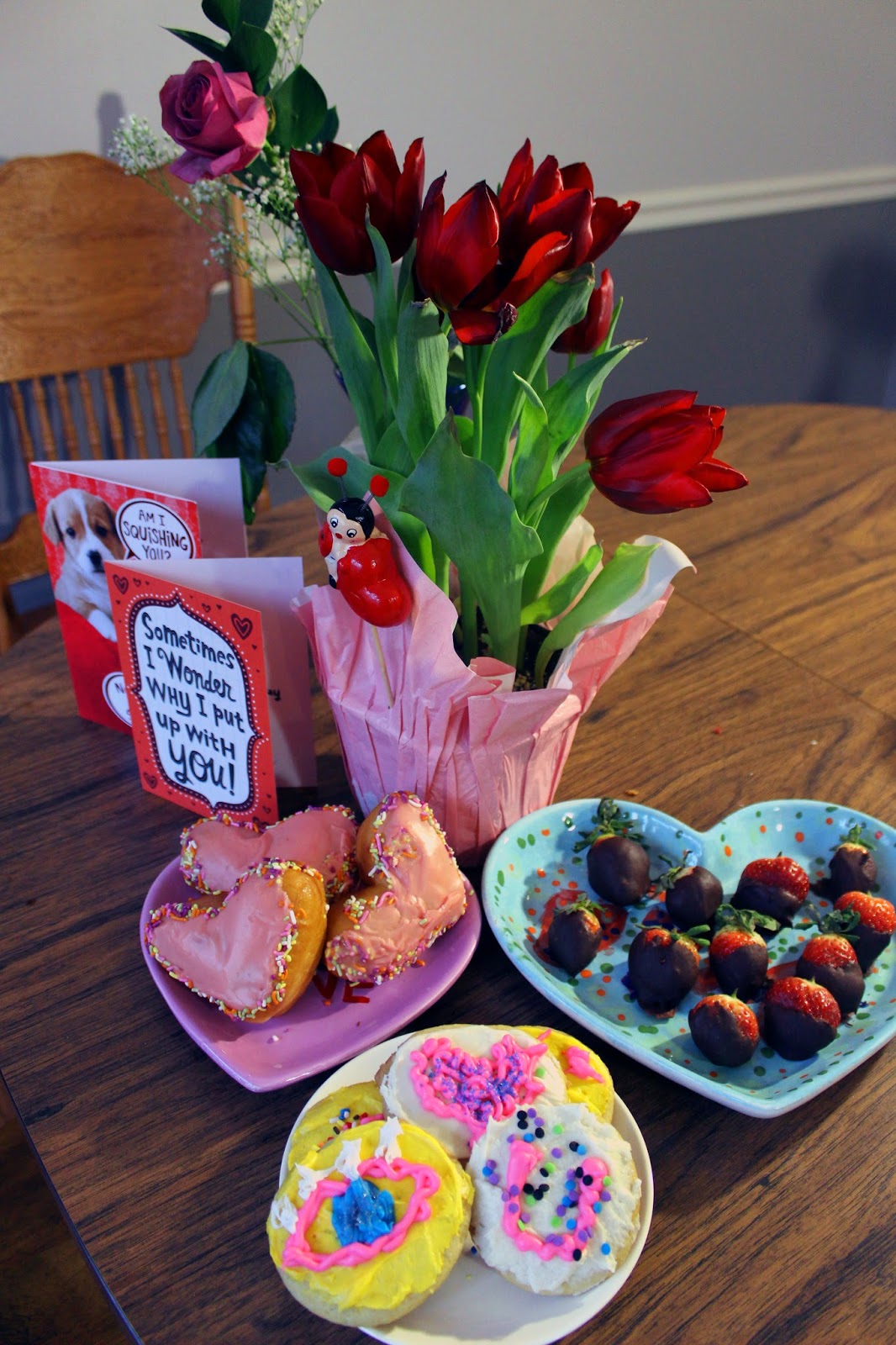 It was my first time trying to make sugar cookies and they were surprisingly easy.  I will defiantly make them again soon.  They were a lot of fun and Kaleigh and I decided we need a few new cookie cutters to add to the collection. 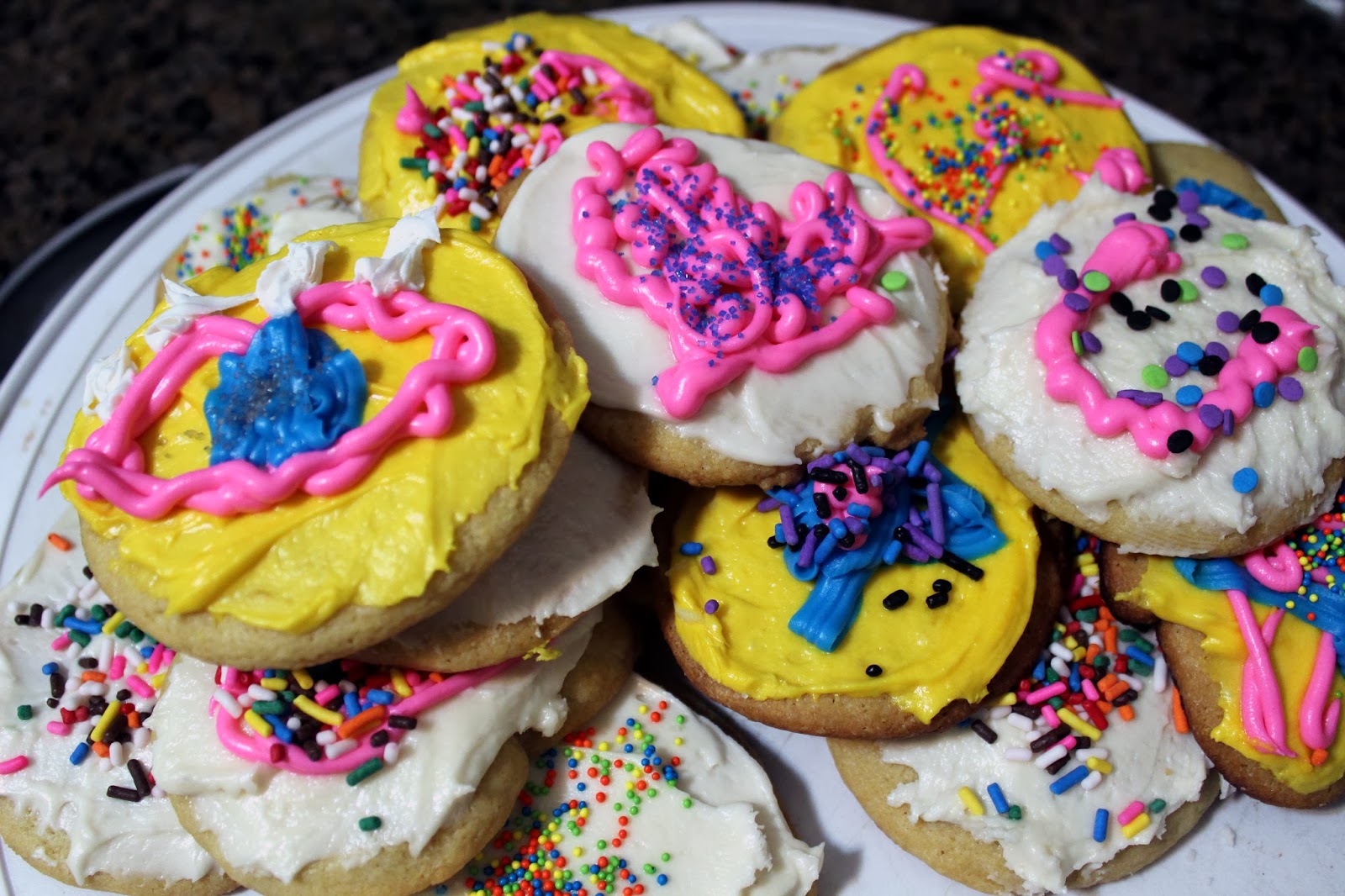 We rented a movie, and took the afternoon to play games and relax as a family.  It turned out to be a great day for us all to share.  We do not get days off together very often but we took good advantage of this one.
at 1:02 PM No comments:

I can not believe it has been a year since we started the Cooking with Kaleigh video series.  It has been a lot of fun.  Kaleigh and I were brainstorming what we should do for the anniversary and we decided to do chocolate covered strawberries again! 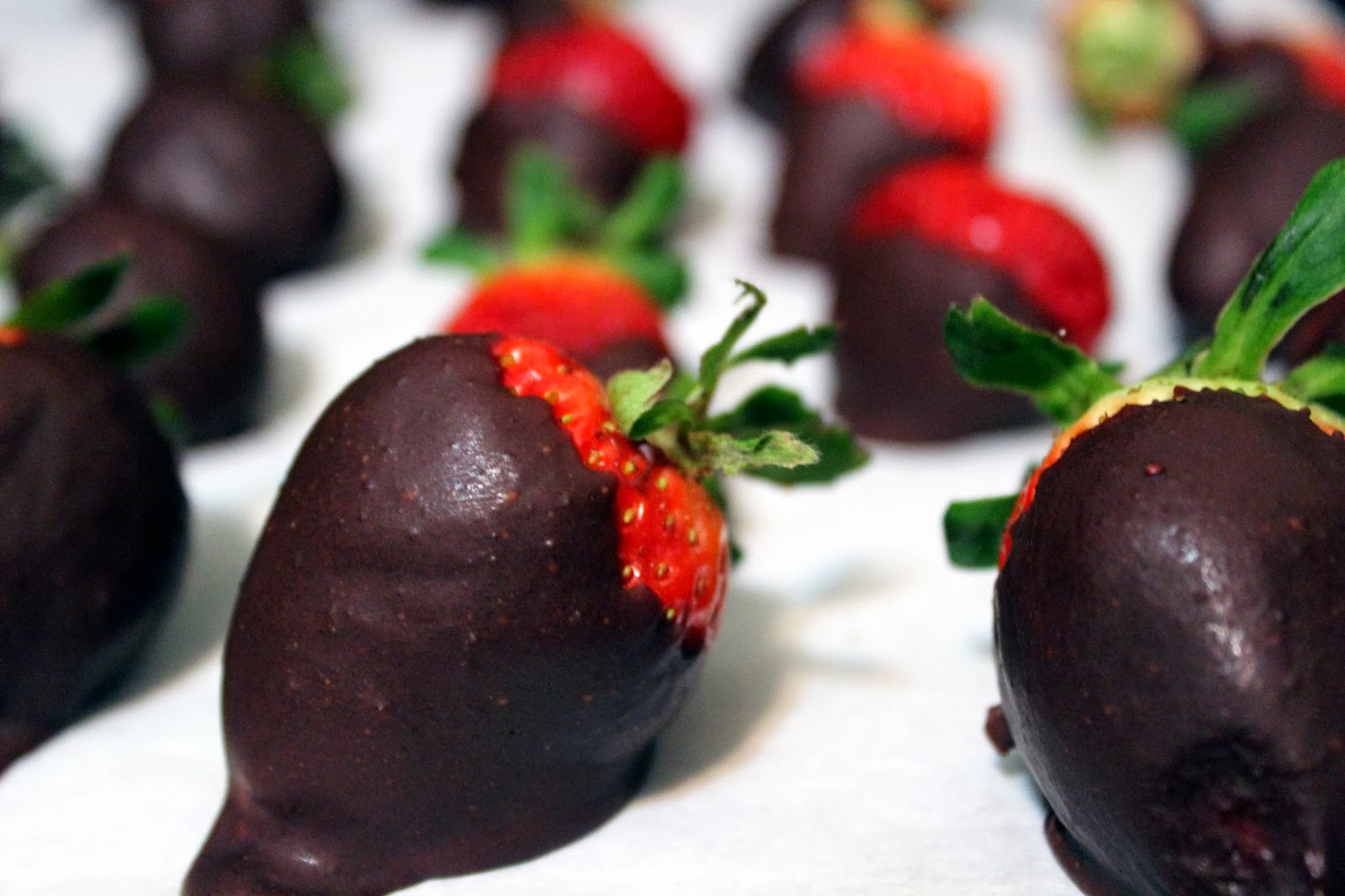 It is really exciting for me to see how much she has grown and how confident in the kitchen she has become.  Living together has been such a great time for me and I can not wait to film more cooking videos and teach her all the cooking I can!

When left to our own devices....

Thursday night, Ashley works until after Kaleigh goes to bed.  Occasionally, I have played games on that night but this week they were canceled.  Kaleigh and I had the night to ourselves.  Which means we had one of our favorite dinners and a great dessert!

Kaleigh has been on a red velvet kick.  Who am I to disappoint a 7 year old?  As soon as we got home from school, we started making red velvet whoopie pies!  In the south, whoopie pies are a rare thing.  In Maine, they are everywhere.  For those readers that do not know what a whoppie pie is, basically it is a cake sandwich.  Our red velvet whoopies were awesome! 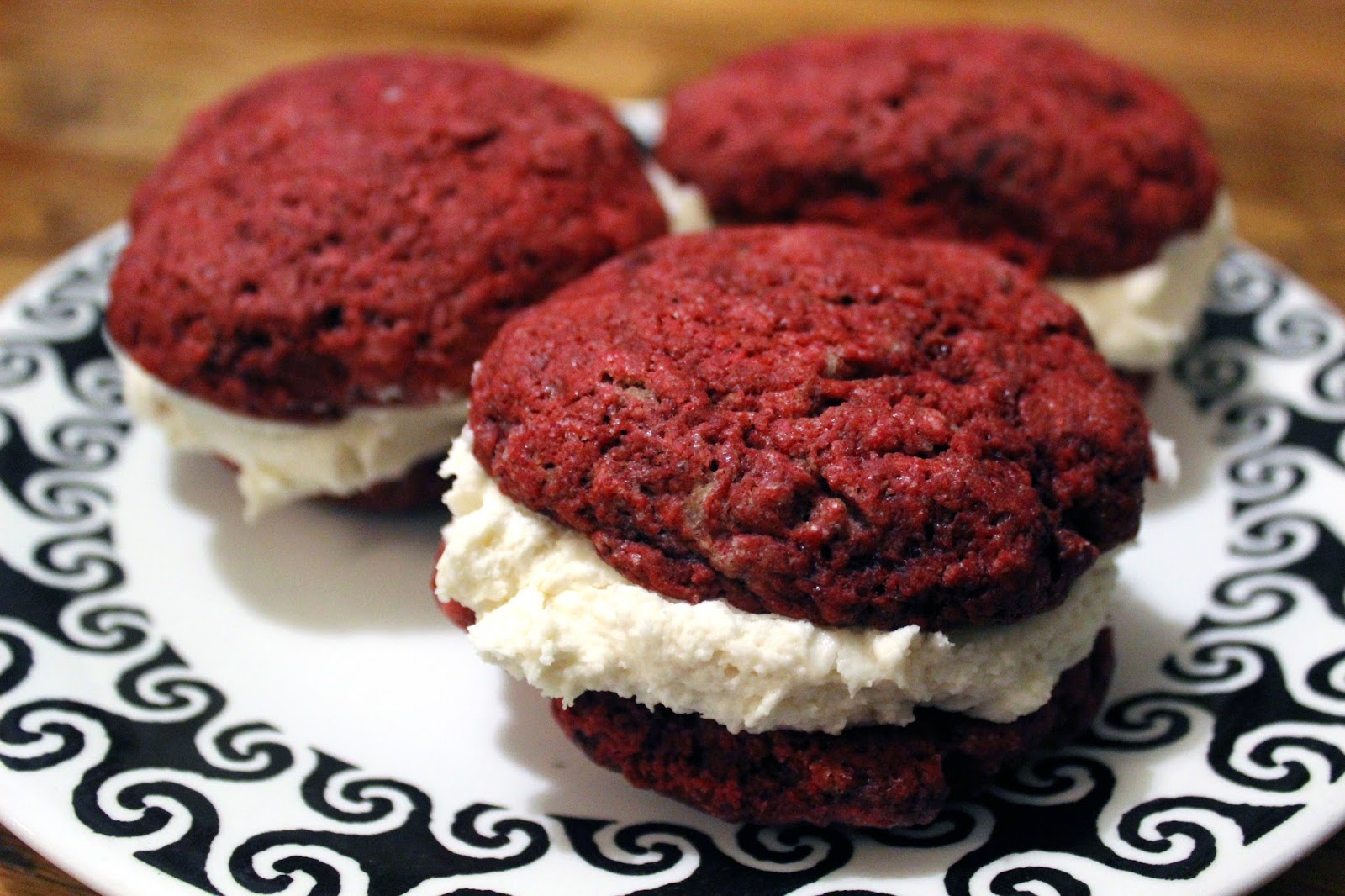 While the whoopies were cooling, we made dinner; baked beans, roasted brussel sprouts, and corn bread.  On the first bite of corn bread, Kaleigh lost her tooth!  Aside from a mouthful of bloody bread, she was super excited.  She refuses to give her teeth up to the tooth fairy.  She thinks if he saves them and gives them up all at once she will get more for them. 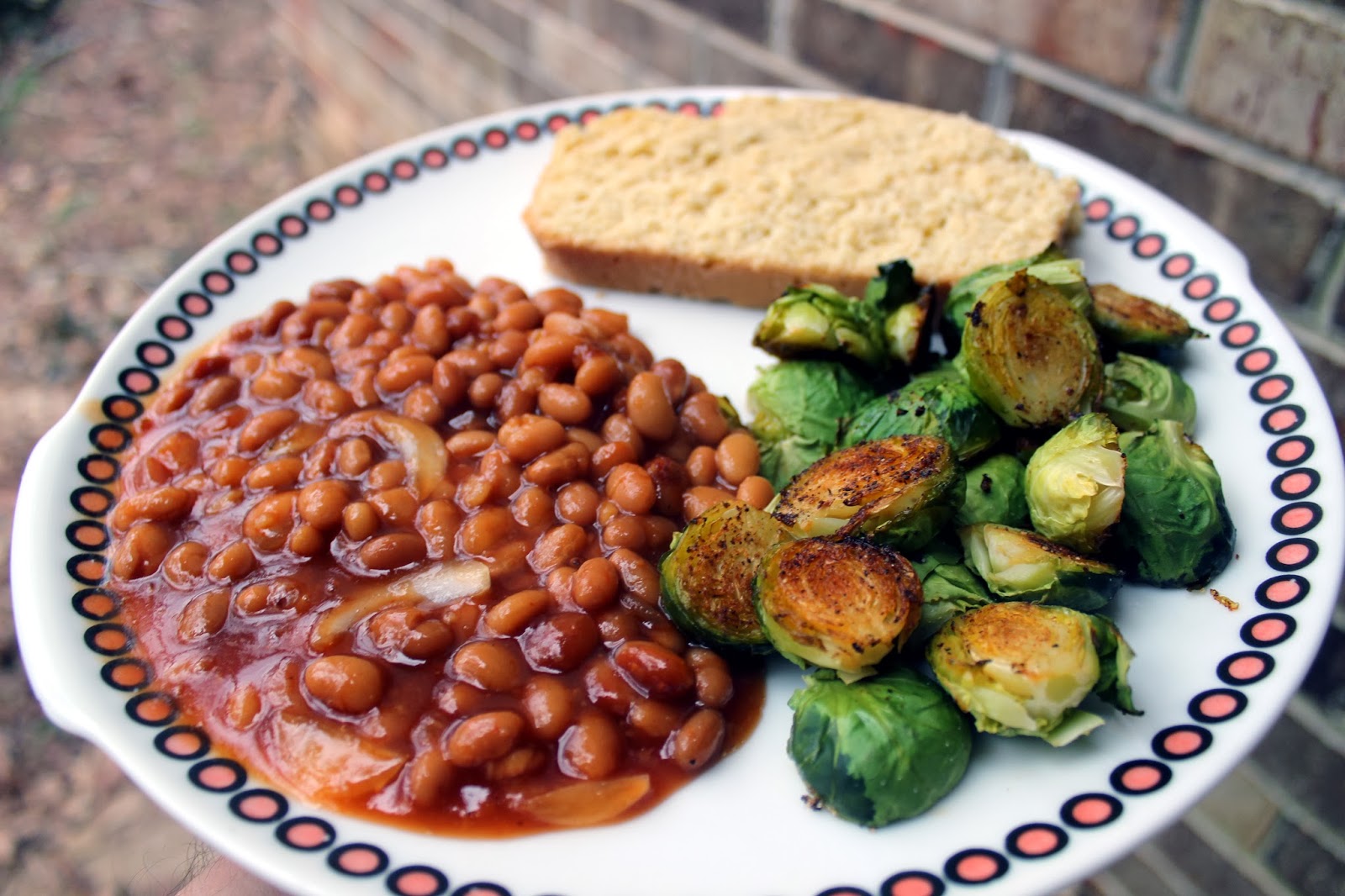 After dinner, Kaleigh and I played with her magic set and then headed to bed.  It was a great night for the two of us.  I really enjoy having her around (only partly because it gives me an excuse to make treats).  We do miss Ashley when she is at work but it is good for us to be able to have time with just her and I too.
at 11:14 AM 1 comment:

It has been awhile since we made Indian food at the house.  Since Kaleigh has really liked going out for Indian food, we thought we would give it a try.  Ashley wanted to try a new dish with it as well.

Typically, I make a channa dish and add in potato or cauliflower if I have it.  I generally add rice and sometimes make a daal too.  This time, instead of daal, I made a sarson ka saag.  It is a creamed spinach dish loaded with traditional Indian spices. 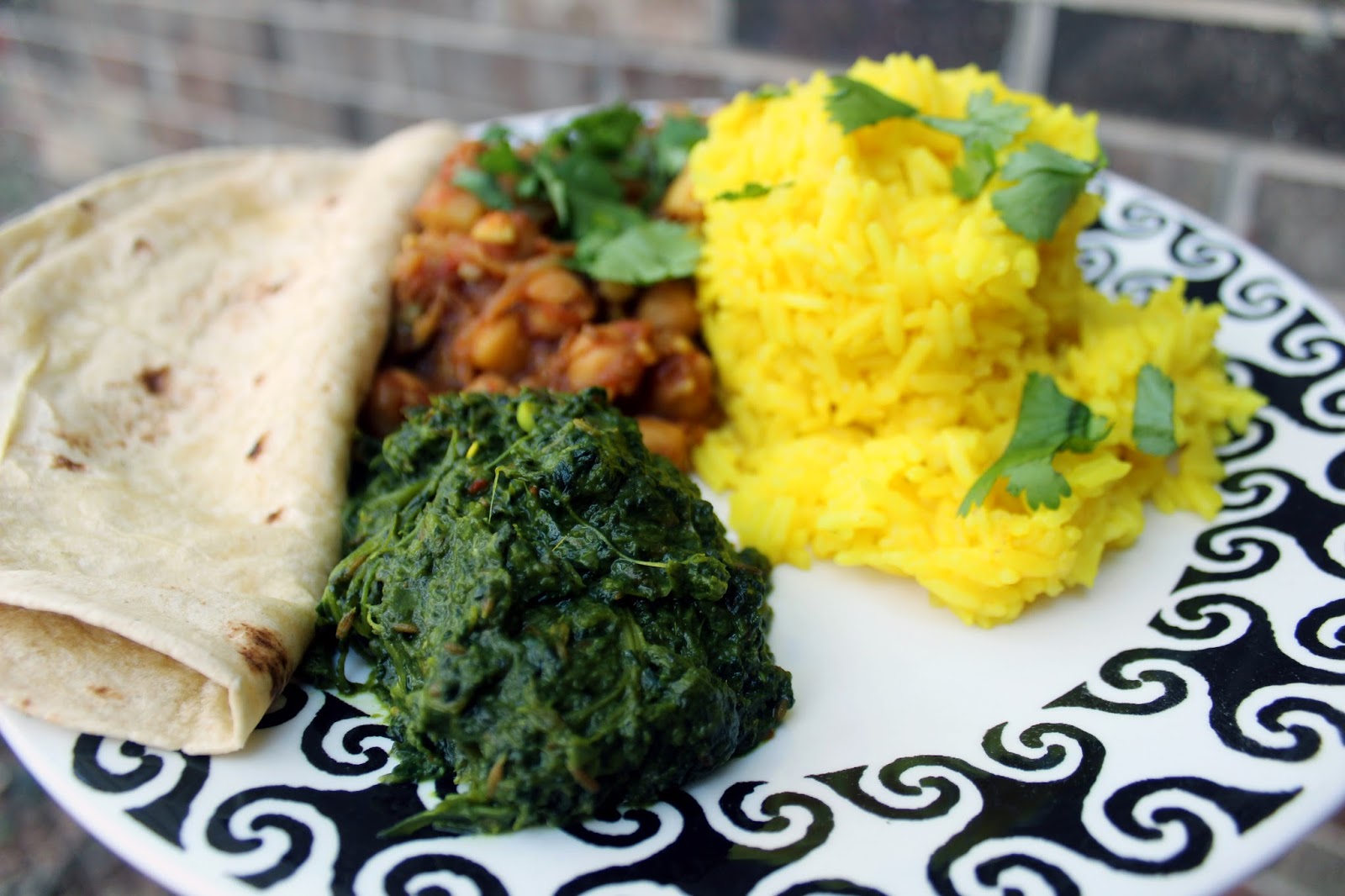 The channa came out great but was nothing new for the household.  However, I had never made a saag so I was going in fairly blind.  It was fantastic!  I used coconut cream to give it a rich flavor and it really did the trick.  The whole meal was great and a lot of fun.  Kaleigh even took some to school for her lunch.  Saag will definitely be on the menu again.
at 11:01 AM No comments:

Being from Maine, a snow day means something very different than it does here in Atlanta.  The city shut down for 4 days when it snowed about 2 inches on Tuesday.  I understand that Atlanta does not have the service vehicles to handle snow and that is why we shut down so quickly.  However, for me, the idea of people abandoning their vehicles on the highway seems a bit extreme.

The time off was a nice break though.  Ashley worked each day at the hospital but Kaleigh and I spent a lot of time together.  Ashley made us some hot chocolate with vegan marshmallows!  It was delicious and very comforting on a "snowy" day.  I got to use my new mug that Kaleigh made me too. 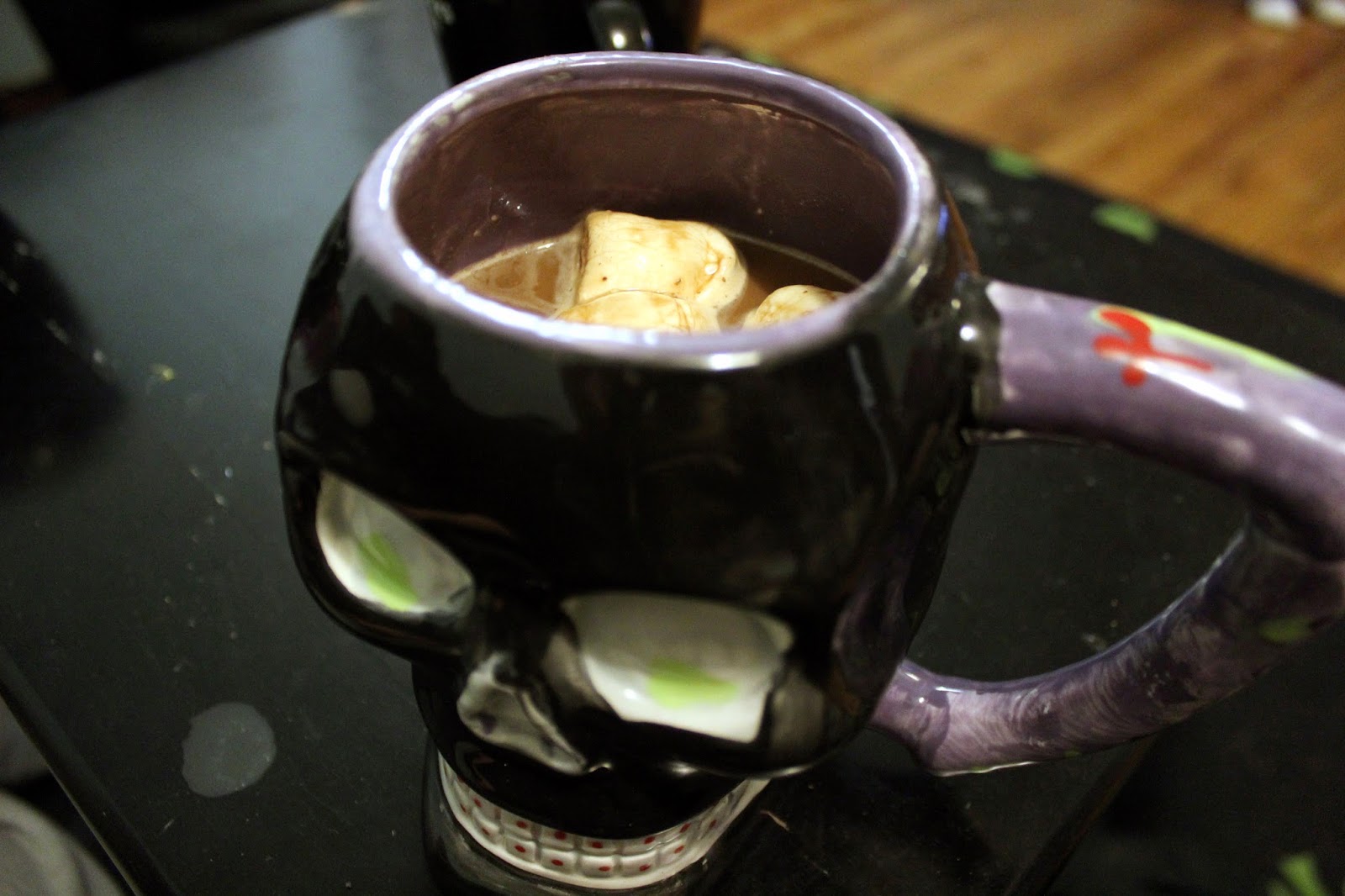 One of the days I made some veggie burgers from scratch as well.  The flavor was great but they were too moist.  I have a few ideas to make them better and I will share the recipe when I have it perfected. 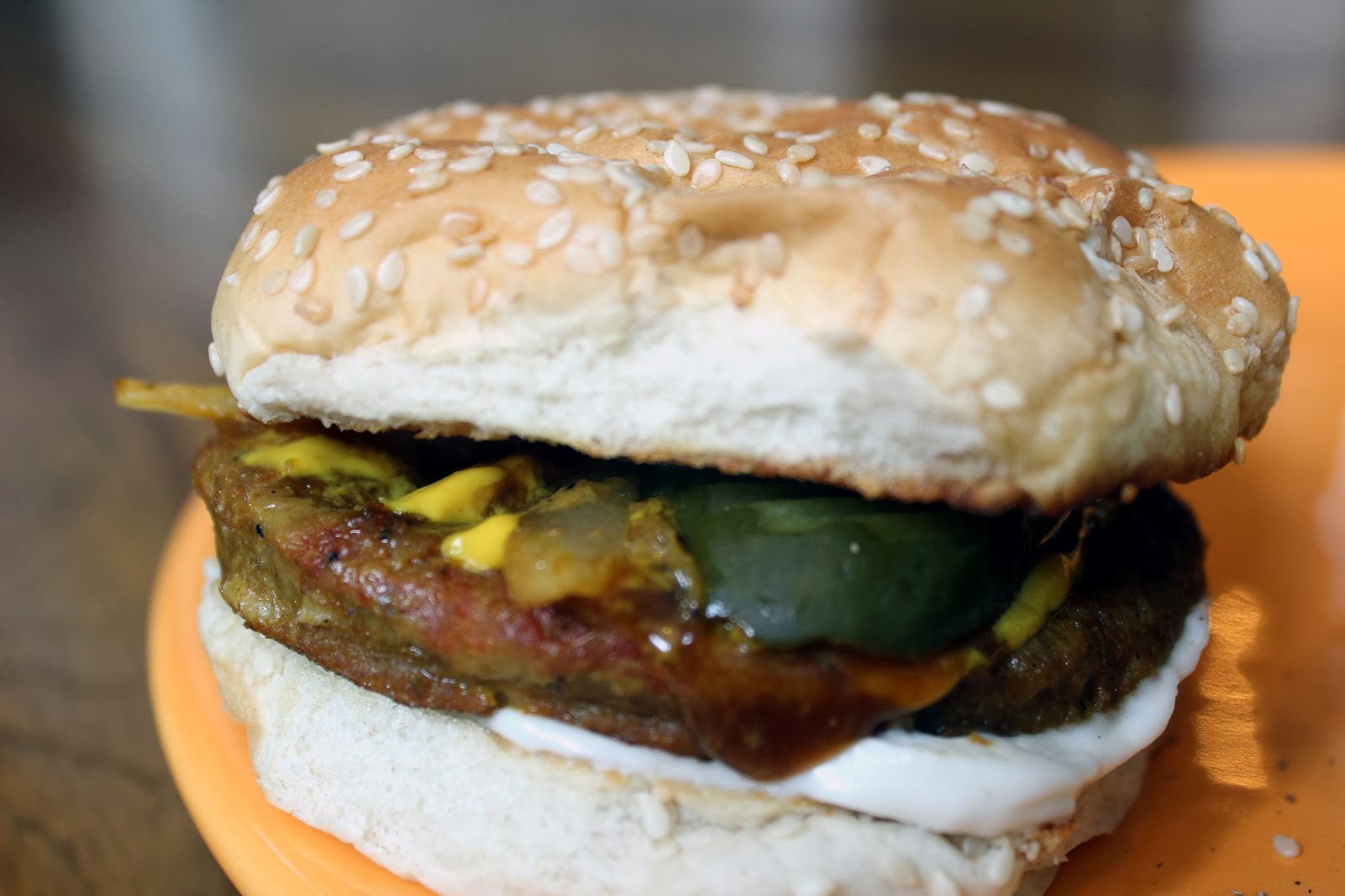 All in all, the snow days were a great family time and we played some good board games.  It was good for us to have the time off.
at 9:57 AM No comments: