As a child, basketball was a large part of my life. As a teenager, basketball represented several things (and people) that I did not want to be reminded of. As a young adult it was mainly ignored until I moved back to Maine for a year. At the time, I lived with my mother, brother and sister. Both my brother and sister were star players on their high school teams. In fact, my sister is the star player on her college team as well. I began going to their high school games mainly to support them, I was a quiet spectator but by the end of the year I was one of their loudest and rowdiest fans. Since then, I have had a newly found interest in basketball. For me it seems like more then a game to watch (I watch no other sports), it is something that reminds me of my family. In fact, several years ago I severed 2 of my tendons in my left ankle playing a pick up game at a local park. This game is no joke.
Since living in Atlanta, I have made it a point to try and get out to several basketball games. Last year I attended 3 in the season. This season is not half over and I attended my first game last night. It was a great game. Phoenix Suns (one of my all time favorite teams) vs the Atlanta Hawks. Atlanta won by one at the buzzer with a three point shot. The crowd went bonkers and I was a happy guy. Highlight real below.

getting ready for tip off 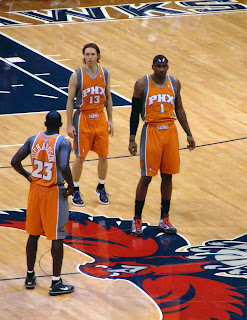 behind the back pass from nash 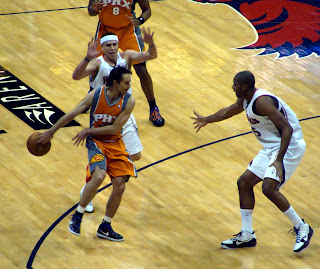 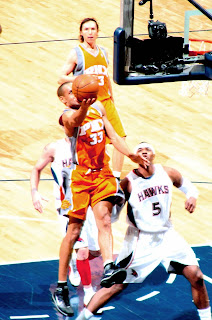 nash on the line. easy two. 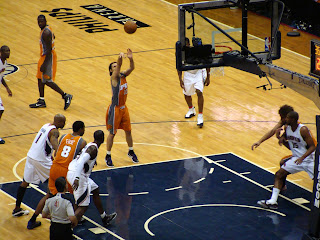 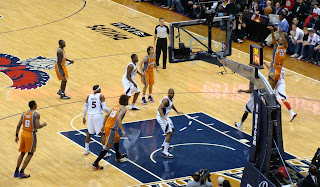 i made your fried seitan strips last night - so yummy! i modified a couple of spices (not many), and then ended up tasting like steak strips. thank you so much for the recipe - i'll be making them again for sure!

I don't know much about Basketball as it is not that popular in the U.K, but when I travel into Glasgow city I become aware of the tall American men who come over now and again to play competitive basketball. Tickets are not that expensive, so I am hoping one of these days to check out a game.

Sorry to read about your tendons.
PS Is that your sister? she's a pretty girl.

Basketball is the only sport I watch on T.V. and I'm a huge fan of Suns especially Nash!

Just found your blog. Great to find a vegan man in the blog world

As a Phoenix native, I love the Suns!!!