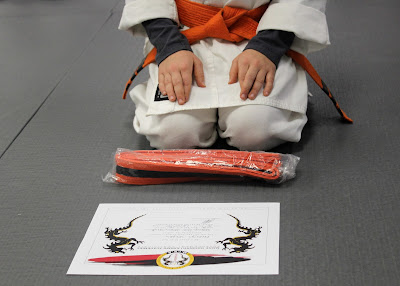 This last week, Kaleigh earned her 4th new belt this year!  We have been attending karate nearly 5 times a week for the past 12 months and each day she is itching to go again.  We are so excited she found something that she loves so much. 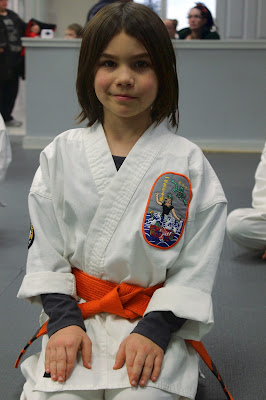 She earned her orange belt with a black stripe, which means she gets to learn a new kata.  She has been on the edge to learn a new one for month.  She is really excited for that opportunity!
at 9:18 AM 1 comment:

Busy weekend and some jackfruit!

This weekend was incredibly busy, as I am sure it was for most Americans.  Ashley, Kaleigh and I spent most of the weekend making holiday presents and I also had quite a few orders to fill over the weekend.  Not to mention that I agreed to bake cupcakes and bitty mints for Kaleigh's school party.

We got nearly everything completed though.  It was a productive weekend for sure.  The girls both leave for Georgia on Christmas day but we are doing some festivities at my mum's house on the eve and my dad's after they return. 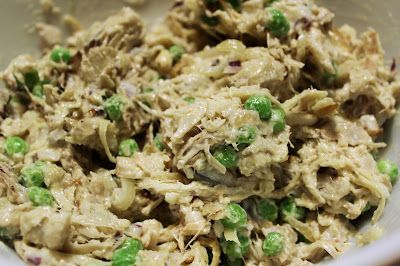 Saturday evening, we took a break from the work and I made dinner.  We are still playing around with the jackfruit and I opted to make a chickun salad with it! 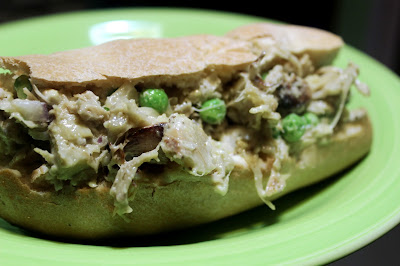 We have been eating primarily gluten free for some time now.  During that time I have been using a lot of sauces for our dinners.  I typically lean more towards cooking Asian dishes so I have been working to improve my sweet sesame sauce. 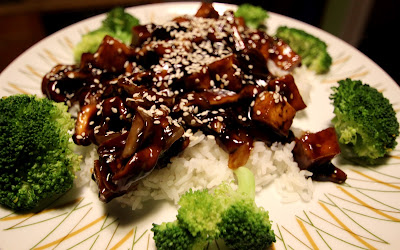 This time we used some tofu and onions and surrounded it with some steamed broccoli.  It was a hit with the girls and myself!  I am looking forward to trying another round soon!
at 9:26 AM No comments:

We are extremely excited to announce our updated menu for our vegan food company, Squashed!  I will just post it up and let folks read through it!  Enjoy, we can not wait to fill new orders!  Some local (Central Maine) delivery options available. 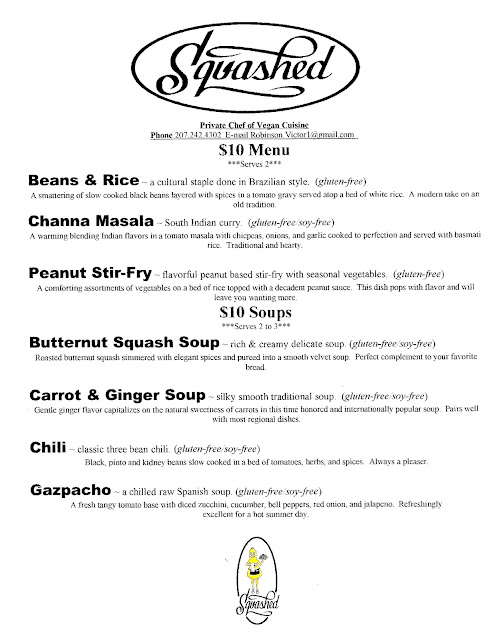 Jackfruit because, why not?

It seems like every time I use a social media outlet someone is showing a another awesome thing they did with jackfruit.  Ashley and I were intrigued and wanted to see what we could do.  The next time we were at the Asian market we hunted down some of this fruit that belongs to the fig family.

When we were ready to experiment with is, we took the easiest route and made some pulled "pork" sandwiches.  We figured that with that much Bar B Que sauce, how could it be bad? 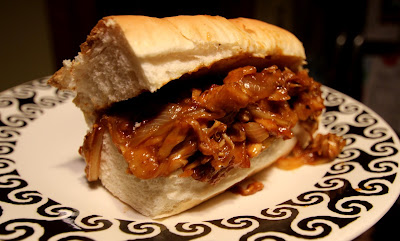 We pan fried both sides and then began to mash it apart into the "pulled" style.  It took a few minutes for the jackfruit to soften up and begin to come apart but when it did, it looked pretty cool!

We fried in some onions and added the sauce, toasted some hoogies and we were ready for dinner!  We sat down, excited but curious to find that these pulled "pork" sandwiches were outstanding! 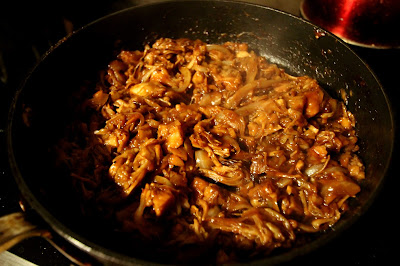 The texture was really unique and we all really enjoyed our meal.  Next time we are at the Asian market I will be getting more jackfruit as I have some wild ideas now!
at 8:31 AM 2 comments:

As the cold weather rushes into the North East we have decided to stop doing music shows until the spring.  Our final show of the year / season was on Saturday night. 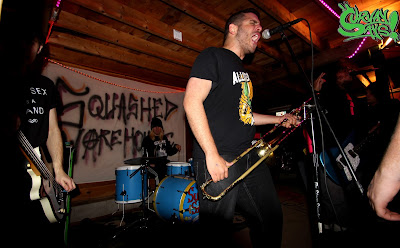 We had Sticker Incentive open up the show.  They are a local part time ska band that has played our space once before.  They are nice guys and their music is upbeat and poppy. 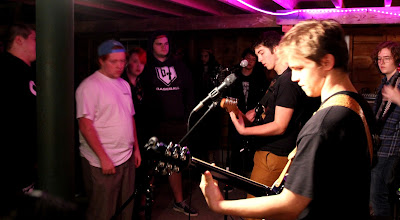 Next up was Bummed Out.  They have played here a number of times and are some of the nicest dudes.  They are always thankful of the opportunity to play and are well liked by the folks that come to our space. 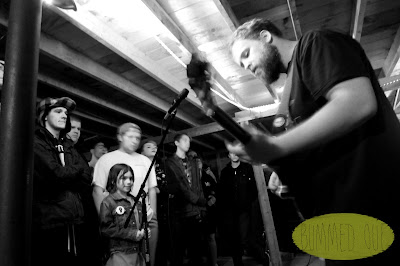 Third was a another local favorite in Stokin the Neighbors.  Just back from tour, they play faster 90's style pop punk and are also some great dudes that have been really supportive of our space.  It is always great to have bands like them come and play! 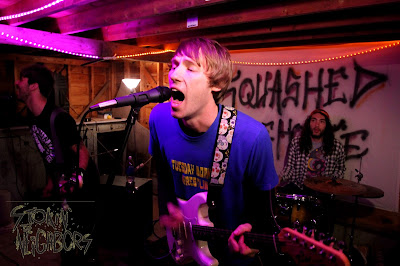 Last was Survay Says, a ska band out of New Jersey.  They play an upbeat ska punk sound with a ton of energy.  Nick from Stokin' the Neighbors really wanted to have me get Survay Says to come up so I tried my best to get them here and it worked out.  The crowd was really excited about them and they played a great set.  They were really nice guys and hung out for a meal after the show.  Ill try to get them back up on their Spring tour! 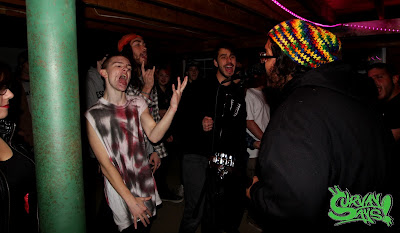 It was a great first year for us doing shows at the house.  Not only is it a needed outlet for me to have access to these shows but it feels great to be able to provide this type of music for Maine folks.  To see everyone having so much fun dancing and shouting and bobbing their head really makes all the work worth it for me.  We have a great community being build and it is wonderful that we can be a part of that!
at 8:47 AM No comments:

We have been making chili for Squashed ordered regularly.  In the past few months, as the weather has gotten colder, it has become out best selling dish.  Typically I make it fairly mild in temperature but I had a special request for some heat on this particular order.

I have found that using jalapeno peppers (which i generally add to chili) does not give much heat.  It offers a small taste but mostly just a nutty pepper flavor.  For this special order, I used chipotle pepper.  The heat was escalated a noticeable degree and referred to as Inferno!

I honestly did not feel in was crazy spicy but it did have a nice heat to it.  Our customers we all happy with the heat it brought so it was a great success!
at 8:29 AM No comments:

Prior to the Thanksgiving break for the girls, I had the grand idea to make a holiday inspired feast.

I made some cranberries, which are one of my favorite things to have this time of the year.  I love the tartness of freshly made cranberry sauce!

I made some mashed potatoes, steamed broccoli and some turkey flavor inspired tofu cubes!  Ashley and Kaleigh loved the tofu turkey bits and the meal was a hit! 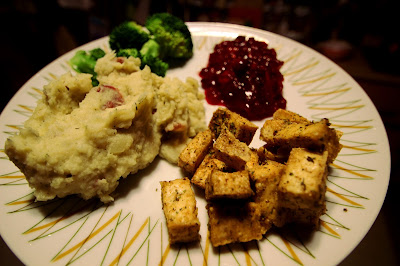 I have always had fun playing with these traditional flavors around the holiday.
at 8:17 AM No comments:

Last year, after the Thanksgiving craze was over we went to my dads for a late weekend dinner.  This year we did the same.  Last year we did a much more Thanksgiving type meal and invited some local family members, this year it was just them and us and we opted for some taco lasagna type dish.

We had some awesome apple pie for desert which was great considering I was unable to eat any pie on Thanksgiving day.  The only pie crust that was vegan was the mincemeat pie.  Irony.

Our visit with my dad was great as always, it has been a really great thing to be so much closer to to them!  It is one of the main reasons we moved up to Maine and it has been better than expected!
at 8:05 AM No comments:

I forgot to post what we did for thanksgiving this year.  We did not go all out but we made a few things.  Last year we basically brought our own thanksgiving but had too many leftovers.  This year we opted for a more modest approach. 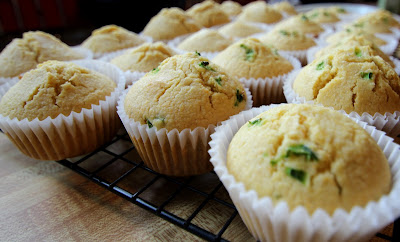 We brought our own vegan turkey option, as well as some store bought stuffing that was vegan.  Ashley made a cool carrot and sweet potato casserole topped with an oat crumble.  I made some corn bread muffins, 12 with jalapeno and 12 without. 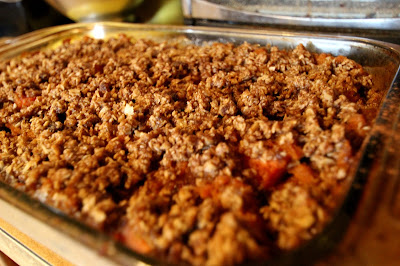 We had a good time and saw a lot of family.  I think it was good that it was Ashley and Kaleigh's 2nd time at my grandmothers for thanksgiving because they knew more people and felt more conformable.
at 9:30 AM No comments: