Red Quinua with Mushrooms and Zucchini

It has been a stress filled week. Lots of major life changes going on all at once. To cope, I made food!

Red Quinua with Mushroom and Zucchini 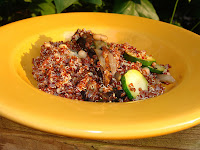 In a pot, bring 1 cup of water to a boil and add the red quinua. Cook on med heat until the quinua is soft and water is absorbed, about 20 mins. Set aside.

In a saute pan, heat the oil. Add the garlic, and onion, chopped. Once the onion becomes slightly translucent, add in the mushroom (sliced lengthwise) and zucchini (sliced circular). Cook until mushrooms are soft, about 5 mins. Add the ground pepper and pine nuts. Cook for about 5 more minutes then all the beans, tablespoon of water, lemon juice, and vinegar. Turn the heat put and let stif vigorously for 3 minutes. Add the red quinua mixture and mix well. Take off the heat and either serve hot or chill and serve.


This was very tasty and made up on the fly. You could do a numver of things with it, feel free to add peas, corn, or even spinach. The mushrooms took this dish to the next level. They were ver good with the vinegar and lemon flavor with a bit of heat from the pepper and garlic.


Yesterday, we made some potato salad and "honey" mustard tofu. The it was a great meal. Very refreshing. This was after I got bit in the butt by a donkey. No joke. I was at a game ranch and playing with donkeys. I was feeding them and when I turned around to see a goat sitting on a bench, one of the donkeys bit my ass! Unreal. It did not break the skin but hurt. I still could not help laughing though. It was a good weekend. 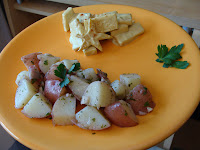 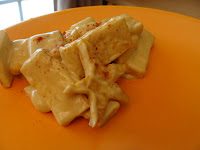 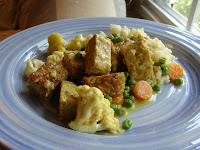 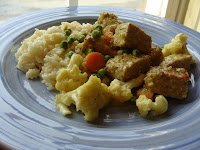 In a pot, add rice, 1 cup of coconut milk, water, 1/2 tablespoon of sugar, salt, and the curry powder. Bring to a boil as if cooking normal rice. When the rice is soft (about 20 mins) remove from the heat and add 1/2 tablespoon more coconut milk and stir well. Place the cover back on the pot and let steam while making the remaining food. In a saute pan, heat the oil on med heat. When the oil is hot, add the tempeh that is cut into 1 inch block chunks. Fry each side until golden brown then remove from the oil and set on a side plate. In the remaining oil, fry the garlic, carrots, and cauliflower until the carrots are slightly soft. Once the carrots are done, add the remaining coconut milk, and all other ingredents. Bring to a simmer for 5 minutes. Add the tempeh back in and stir gently until all tempeh is coated in the cocnut mixture. Serve hot with the rice under of on the side.


Today I went out to the house with a vendor and got a quote for having some trees removed. I have spoken to a few people about roommate potential when the house is finished. I hope that it all works out. This is a big step.

The NBA draft is on tonight! I have been looking forward to this for a few weeks now. It should be a lot of fun.
at 3:31 PM 8 comments:

I was remodeling this blog the other day when I realized that I had not taken the time to introduce myself to the followers who do not know me personally. Let me borrow your time, briefly.


I grew up in Maine, until I was about 19 years old. I got into punk and hardcore at an early age (my 1st show was on my 11th birthday) and never looked back. Playing in bands and learning the ideals and rage from this culture really set the tone for my life. Protests, touring, record labels, all ensued. I was extremely active within the community. At the age of 18 I decided to become vegan, in fact, I will be vegan for 11 years next week. When I turned 19, I left Maine, cleansing myself of my comforts. My life-long friend helped me throw away the muppet-hide couch and everything else I owned. I was on a bus to Tulsa OK, where I spent Christmas, alone in a friends apartment while he was with family. From then, the tale gets long as I traveled for numerous months, finally landing in Amherst Mass.


Eventually I fell away from the music of punk but retain much of the culture. Now it is mainly socially relevant hip-hop and some post-punk stuff. Don't get my wrong, I still wail out to some hardcore now and again.


Two years later, I had lived in 6 different states all over the country. It was a hectic time that led me through Indiana, Colorado, Oregon, Maine, Michigan, New Mexico, and Massachusetts. Lots of apartments and too much moving. After a year in Maine with my family I headed to Geogria. I have been here since 2004 and today... I BOUGHT A HOUSE!

My life has been full of changes but there have been many constants as well. It has brought me to where I am now and I see many more changes on the horizon.

I thought you might enjoy some of the growing up years.... 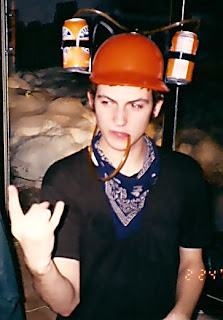 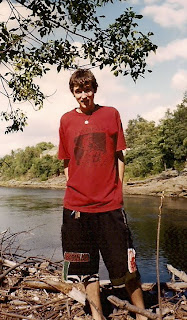 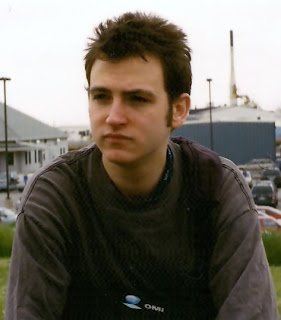 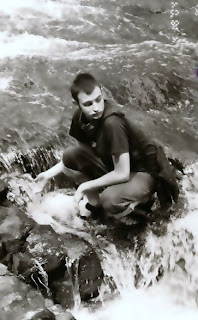 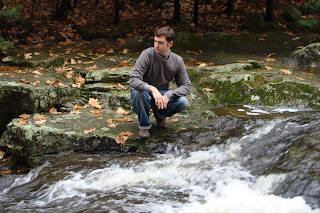 And some recent food (the sausages are from Vegan Brunch) 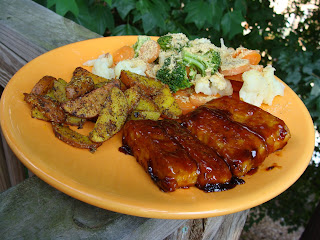 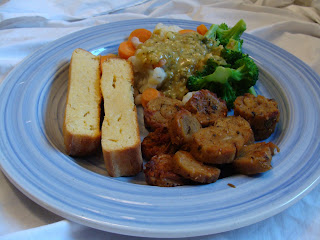 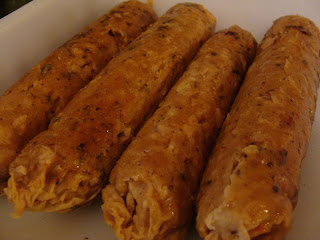 It has been a hectic week. It appears that the closing for my house is next Friday at 11:00am. It has been a long road but it looks like this part is coming to a close. Throughout the process, the Real Estate piece has been extremely interesting to me and more fun then I thought it would be. I may look into getting more involved. We will see.

Food this week has been modest at best. More quick meals and even some going out to eat. However, I have made a few nice desserts. I made another cheesecake. This time I used a 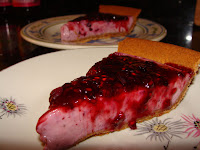 number of berries that we had at the house and it turned out amazing! 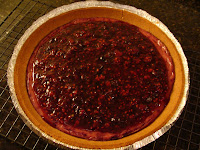 Pre-heat the oven to 350. In a sauce pan, pour water, brown sugar, vanilla, and maple syrup. Bring to a simmer and allow the sugar to dissolve. In a food processor, add the tofutti cream cheese, berries, and sugar. Puree until smooth and well mixed. Add in 1/2 cup of the water and brown sugar mixture. Puree until well mixed. Add in the lemon juice and puree until smooth and well mixed. Taste. The mixture should have a strong berry flavor and be richly sweet. Add more water / brown sugar mixture to make sweeter and more berries for more berry flavor until satisfied. Pour the mixture into the crust and bake in the oven for 30 mins. The edges should begin to pull away from the crust a bit when done. Chill for 3 hours and top if you wish. 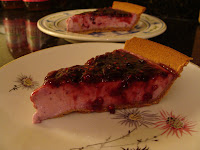 On low heat, bring all ingredients to a slight simmer. Stir regularly and let simmer for about 20 mins. The berries may need to be mashed. After simmer for 20 mins the sauce should begin to thicken. Once it tastes to your satisfaction and is your desired consistency, remove from the heat. Let cool for 15 mins. Do not pour on a cheesecake that has not cooled. Once the topping has been poured on the cheesecake, place in the fridge uncovered for several hours, until cool.


I also has some left over cheesecake batter from last week. It was still good to a drizzled it over some of the berries we had for a fruid salad dessert. That night we also had some baked eggplant. 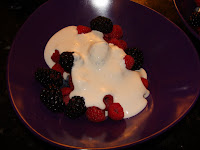 I am sad to see the Orlando Magic struggle but what can you do? Hopefully my week upcoming will have more productive cooking.

Huge thanks to Jenn for sending me a signed copy of Vegan Brunch. It is great and I can not wait to try some of the amazing recipes! Go check out her blog as well. She is an inspirationion! 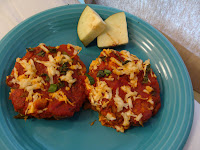 Home Alone for the Weekend

After work today, it was dinner for one. I pulled out some soy curls that we got from Cosmo's about a year ago. I had never used them and though I would try my hand tonight. Typically, I do not make real food when I am not cooking for at least two. It generally ends up being what I call "1-player foods", veggie burgers, sandwich, etc. Nothing fancy. It is hard to get motivated to cook for myself. I was motivated today and whipped up a nice dinner, along with another spinach smoothie. It was nice when followed by 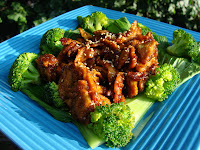 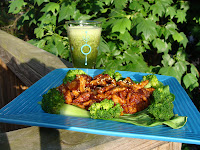 Jamie took the day off today. She is heading out of town to some sort of wedding. I do not understand the concept or excitement. They seem like too much work for a small tax break. Anyway, she made some really nice wedding gifts for her friend. I have been bugging her to try and sell some of the home-made fabric flowers on her etsy site. She thinks the market is saturated. 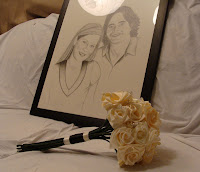 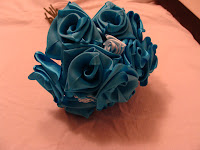 Tomorrow is another day at work and Sunday is my last hope for the Orlando Magic. Keep your fingers crossed!
at 10:59 PM 5 comments:


Pre-heat oven to 375 degrees. In a large bowl, mix shortening, both sugars, margarine and whatever you choose to use for an egg replacer. Mix until all sugar is folded in and all shortening and margarine is evenly spread. Add all other ingredients and mix well. Take hunks of dough and form into patties, much like a veggie burger. Place on a non-stick baking sheet about 3-4 inches apart. Place in the oven for about 10-12 minutes. Once done, it is best to let them cool on the baking sheet for about 5 mins before trying to remove them. Place them on a brown paper bag or wax paper on a cooling rack for fast cooling.


I had high hopes to make some banana bread with my bananas, however, it seems they are yummy all by themselves. I may have to get more...

Honey and a Drink for Tara

It has been a simple week so far. The house is coming together well, I suppose. Lucky for me, I am not in need of a place to live. I saw Star Trek this week. It was mediocre. Some major irks but overall entertaining.

I also made some nice food this past week. First off I want to show support for Tara - The Snowy Vegan. I made a spinach smoothie. It was yummy. It does have honey in it. 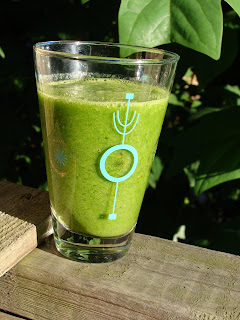 My thoughts on honey: I think big business honey is a major issue with regards to the bee industry. Millions of bees are killed for the grocery store honey. However, since extracting honey does not actually damage the bees, local honey is a different issue for me. If I am confident that the bees are not killed after each season and are allowed be wild, I do not see a huge issue with eating honey. On that note, when Jamie and I were in Florida, we found a little honey stand on the side of the road, with about 10 small jugs for sale. We picked one up. Disagree if you would like but I think that in a more primitive world, humans are scavengers and are likely to occasionally eat things like honey. Your thoughts? (now watch my subscribers drop off like bees in the corporate machine!) 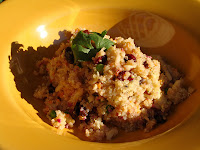 I also made a quinoa pilaf with some shredded cabbage and carrots. It was light and refreshing. I generally cook heavy foods and this was such a treat. It always surprises me how well I feel after eating something as health as this dish.

We also made some Mac & Cheese. 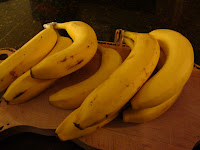 This is what $0.99 worth of organic bananas looks like at my local farmers market.