I killed a snake.

While mowing the lawn, I encountered some critters.  I was in the back of the house, near the tree line, when I saw an Eastern Kingsnake about 3 feet long.  At the time, it was moving fast enough that I could not tell what kind of snake it was, all I knew is that is was coming toward me.  I quickly moved away from the woods to try to get out of its way.  It changed its direction and headed right for me again.

Although it was not going at full speed, it was coming toward me at a quick pace.  I backed up further and it still came toward me.  Feeling like I was going to be attacked, I pushed the lawn mower forward and jumped backward.  The lawn mower made quick work of the snake.

Feeling badly and wishing the snake had just gone into the woods, I disposed of the snake.  Slightly nervous, I finished the back yard and moved onto the side yard.  Another snake!  This one was slightly larger at nearly 4 feet.  With more room to maneuver, I was able to encourage this snake to head back into the woods.

These types of situations are tough to deal with as a vegan.  I feel that may folks in the vegan community would be critical of my decisions but I feel strongly that killing when feeling threatened is a natural occurrence.  While my life may not have literally been in danger, in the seconds the situation transpired, I felt threatened and did not know if the snake was poisonous or interested in attacking me.

For me, veganism is a branch of who I am.  Veganism is a step toward being bio-diverse.  Animals kill when threatened in the natural world.  While I am sad that I killed the snake, I do not feel like I did anything wrong or against my vegan beliefs.

This is a polarizing topic within the vegan community and I wanted to use this story to tell my position on the issue.  Killing animals (human and non-human) is not inherently in-opposition to veganism.  Things are simply not that binary.

To make it up to the vegan blog world, here my new smokey lentil and veggie soup!

Recently, the girls and I took a nice late spring hike.  We hi-jacked Kaleigh from school.  We feel pretty strongly that some time in the woods experiencing nature is worth far more than the grind of academia.  We do not keep her out of school often but we do feel she gets a lot out of our family hiking trips. 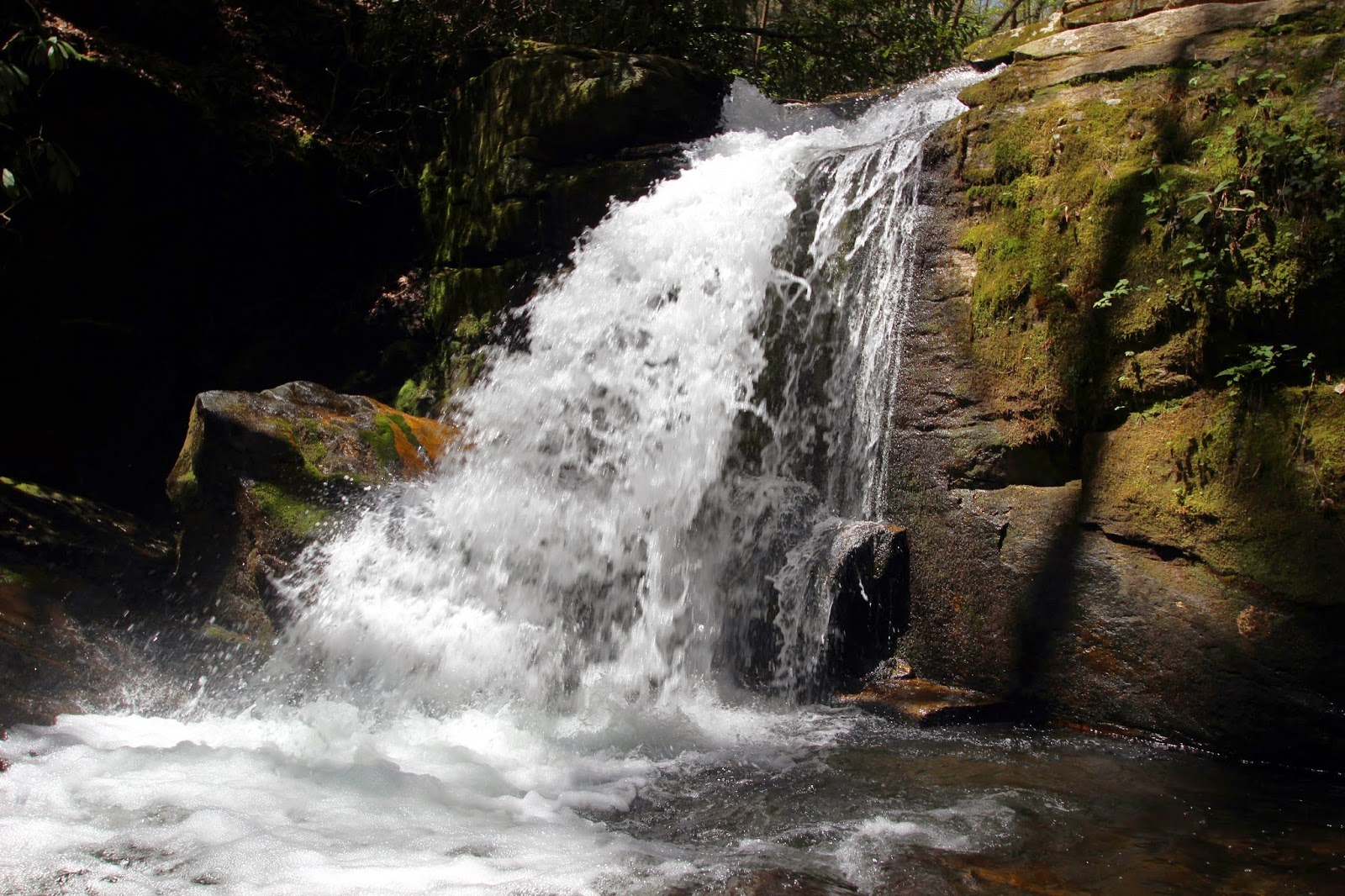 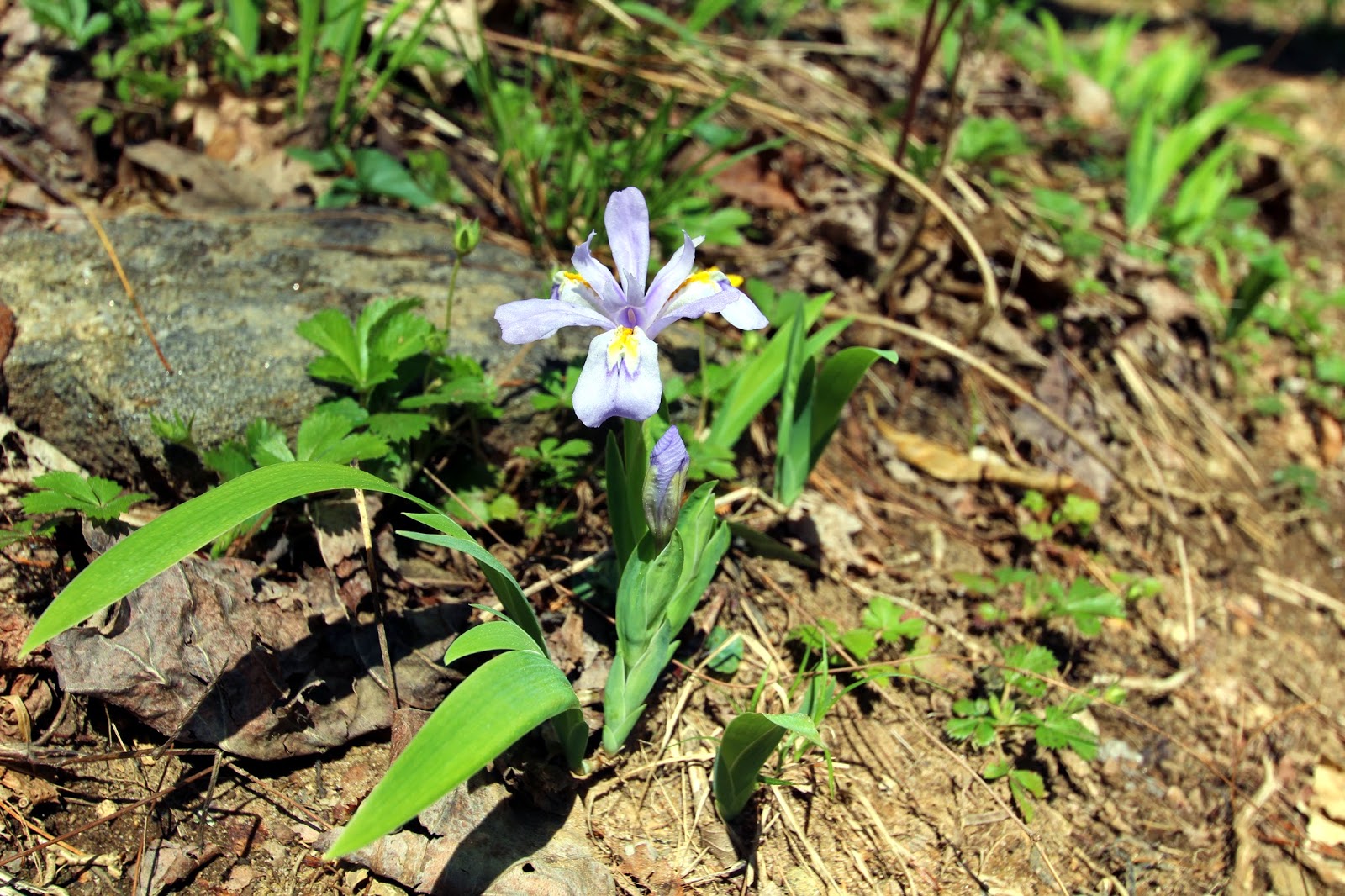 This time we took her a couple hours north to Raven Cliff Falls.  Its about 5 miles round trip but not a difficult hike.  With Ashley and Kaleigh's little legs, it was still an all day event.  I got to use my new tri-pod and I think I got some great pictures. 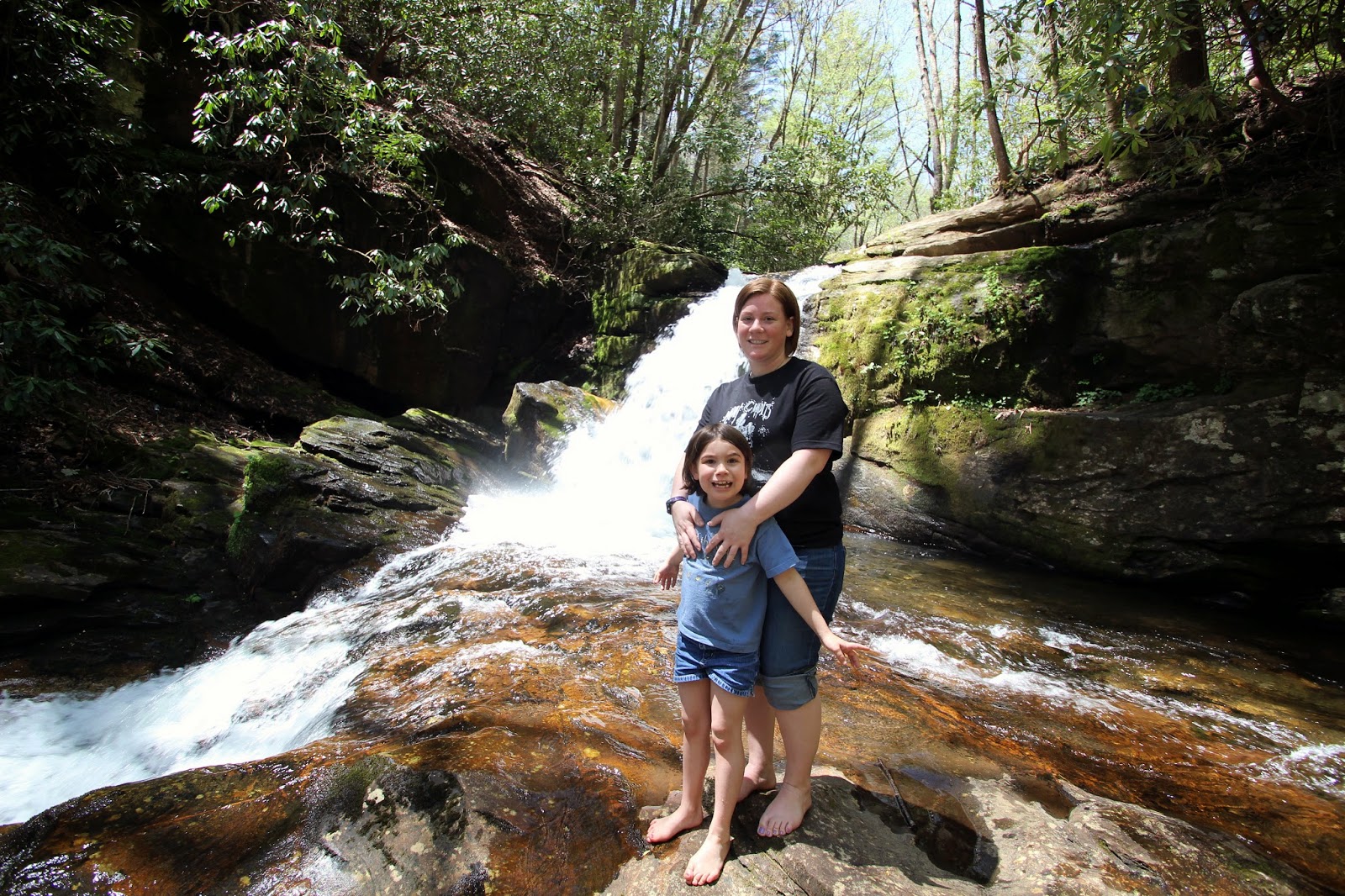 We have lunch while sitting at the top of a waterfall and used out new water-filled pack to stay hydrated.  It was nice to be so hands free. 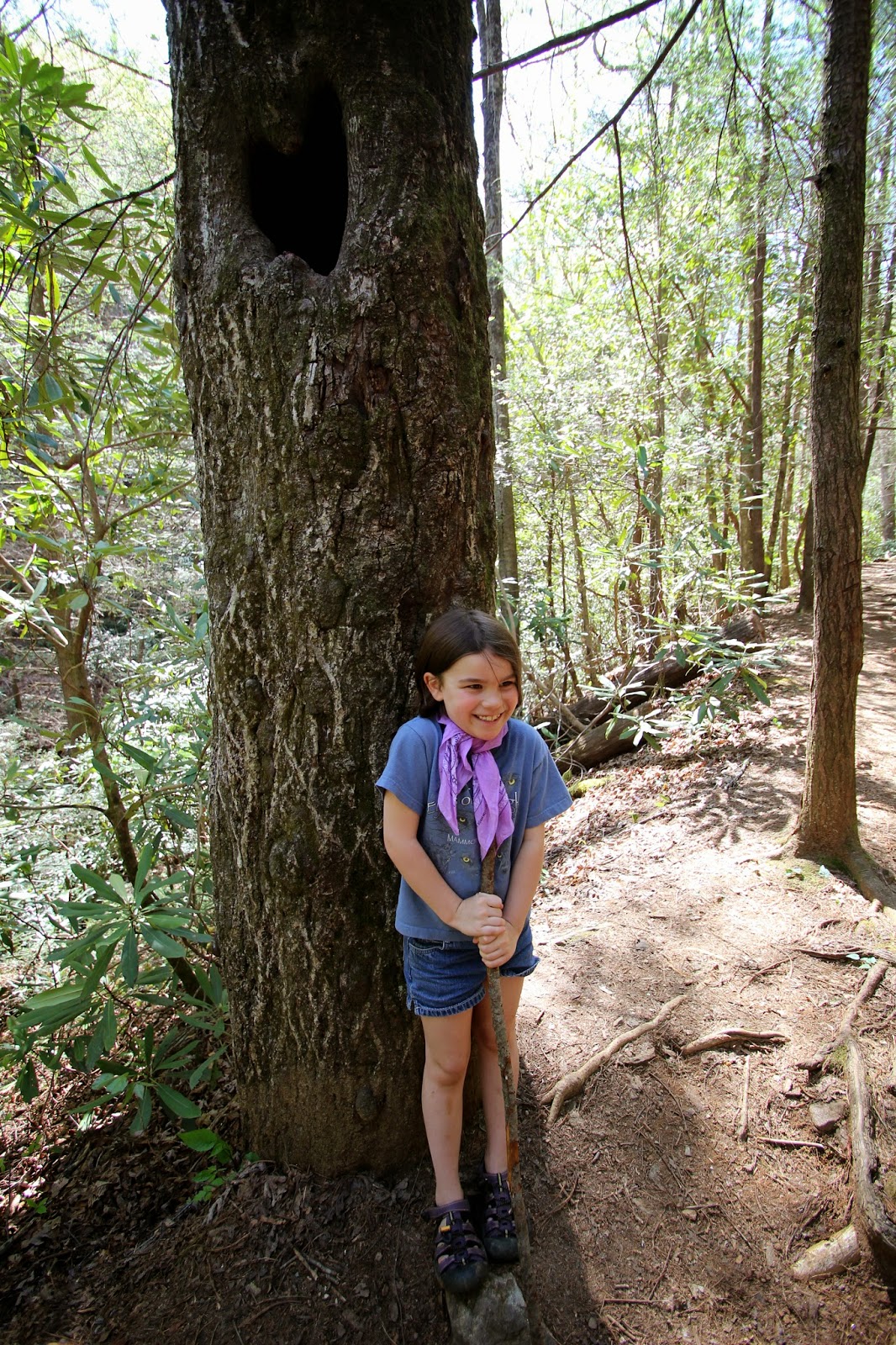 For the past three years, I have hosted Kaleigh, Ashley and her mother for a three generation Mother's Day brunch.  I always try to keep it fresh and new while maintaining the old classics.  Typically there is a home fries and pancakes.  This year, we opted for a waffle and homefries.  We also had a fruit cup (tucked into a dragonfruit bowl) and biscuits with gravy. 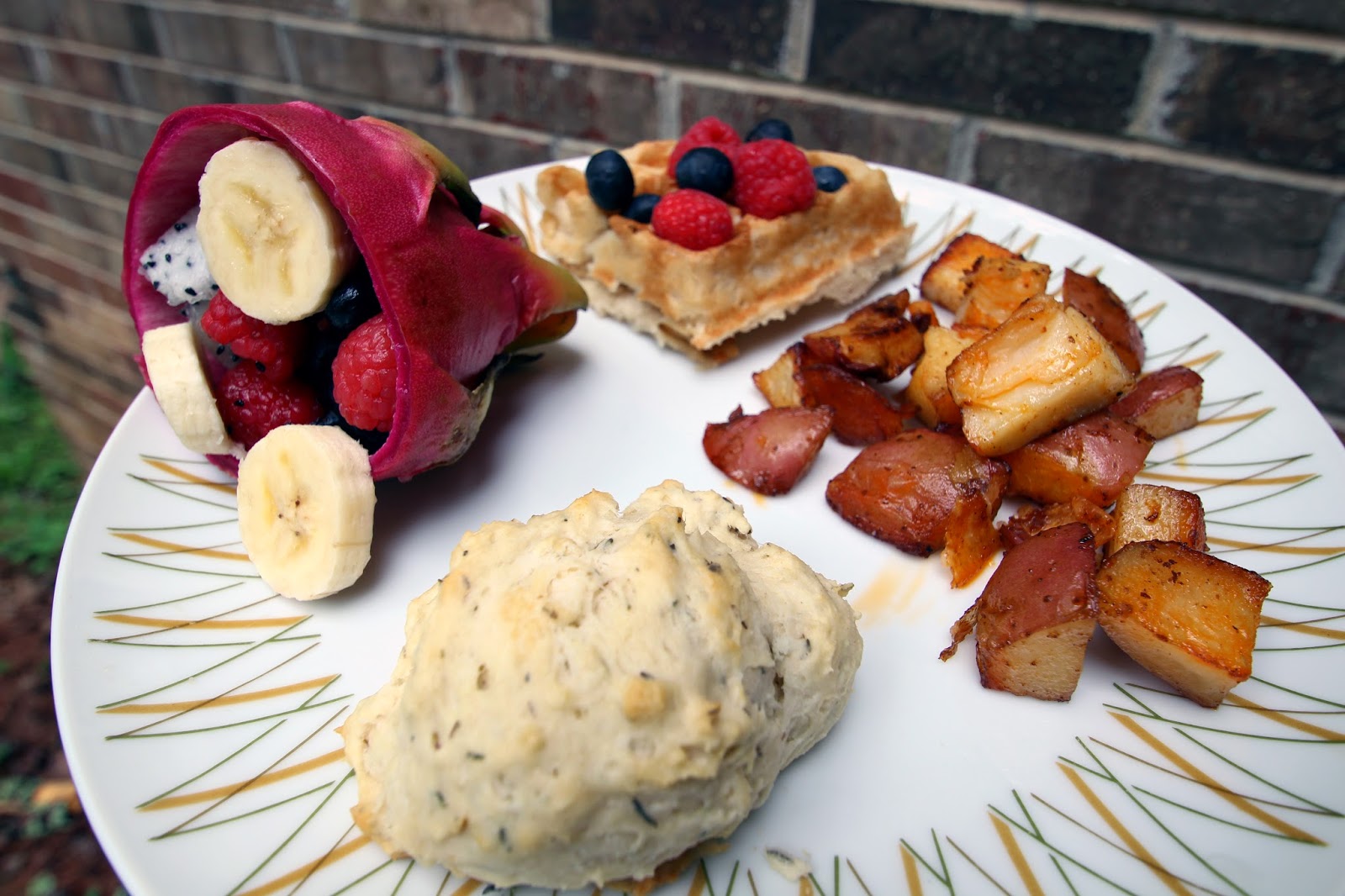 With Ashley and Kaleigh now living with me, I enlisted my prep cook (Kaleigh) to help make brunch.  Kaleigh measured and mixed all the biscuits and did the entire fruit cup herself.  We make a great kitchen team.

While the cooking was going on we took care of the house.  A little cleaning and presentation of flowers and cards.  It turned out great.  I do not have much experience with biscuits but we used a recipe out of Vegan Brunch and they turned out great!  We increased the herbs and the were packed with flavor.