For her last birthday, Kaleigh got a tofu making kit.  It got set on a shelf and forgotten until recently.  This weekend she wanted to try and make some homemade tofu.  It is something that I have never done so we pulled out the kit and began to follow the instructions. 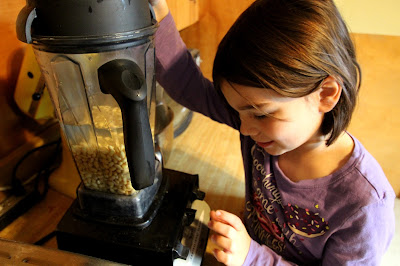 Unfortunately, it was not long before what we were working with no longer resembled the instructions.  We began to wing it.  By the end we had several blocks of soy product that looked similar to tofu but tasted awful. 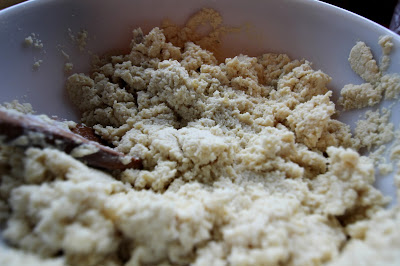 We still have an awesome kit and loads of soybeans and will look up some other recipes and try again as Kaleigh was heartbroken that 2 days worth of work did not come to fruition. 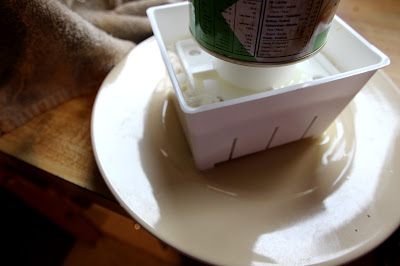 I am not very familiar with African food.  I have never been out to an African restaurant and never tried to cook it at home.  To say my exposure has been limited would be an understatement.

Ashley asked for soup last night for dinner and my mind immediately went to butternut squash soup but I wanted something new.  Something we had not had before and might be some fun flavors to experiment with.

After some limited internet searching of flavor ideas I decided to make a West African Peanut Soup.  While I looked into the typical spices used in West African I also decided to make some cabbage on the side and toss the pomegranate we had in the house on the plates as well. 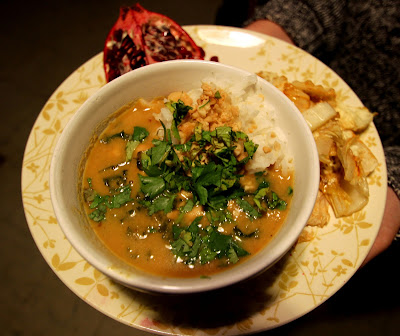 Ultimately I think the dish could have used a little more salt it was actually quite a good first try!  We all liked it and we even have a little leftover for lunches!

About every six months, Kaleigh and I pull out all the food scraps that we have been saving in the freezer and make a bunch of vegetable broth.  This weekend we took the opportunity to clean out the freezers and opted to make loads of room by removing all the scraps and brothing! 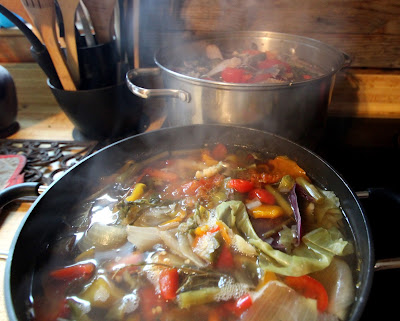 We got out our two large pots and started packing in frozen food scrap veggies.  Adding water and bringing to a simmer.  Adding more water and simmering for several hours until the broth was dark in color and all of the veggie scraps were simmered well.

We double strained the broth to make sure there were no food scraps left in it and got 6 large jars of broth before dumping the simmered scraps into the compost.  It is always really rewarding to make broth and I am thrilled Kaleigh enjoys it.  We get to talk about how we try to use everything to its fullest but eating the veggies, then using scraps for broth then composting what is left. 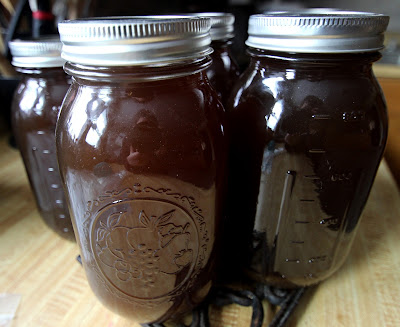 As the cold weather storms into the North East, it brings with it the desire for hearty and warm soups!  Around our house, soups are one of our favorite things to eat.  There is not many foods as comforting as a warm bowl of soup.


Over the last few days I have made three great soups for myself and the girls.

My Mum had a Birthday!

Sunday we celebrated my mother's birthday.  She had family and friend come over and do a painting class with her.  It was a lot of fun and resulted in some pretty cool paintings!

I baked her a cake, cinnamon raisin cake with a layer of pineapple butter cream topped with vanilla butter cream and crushed pecans.  I really have been enjoying cake baking! 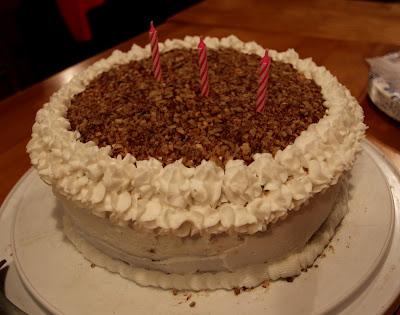 My mum has been a great influence in my life and I am so happy that she is creating her own space and enjoying her life now.  She lived unhappily for too long at the expense of an awful husband and the resulting children who were a challenge.  It is great to see her flourish and love her time now.  Happy Birthday mum! 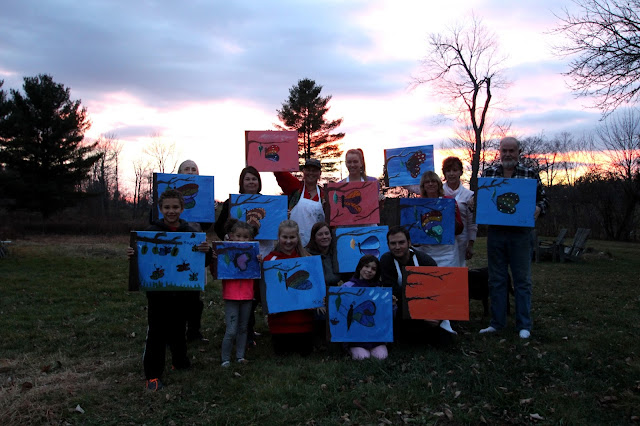 This was a great weekend.  Friday I was able to spend some needed quality time with Ashley and watch a movie during the afternoon.  It was a relaxing opportunity that we do not get often enough and really set the tone for a nice weekend.

That evening Kaleigh and Ashley opted to stay home while I took the drive to Bath for a show.  My friend James had set it up and I helped him get his first touring band, Puberty Wounds.  They were a lot of fun and it was great to see some new faces as well as some old friends! 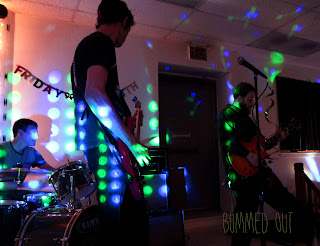 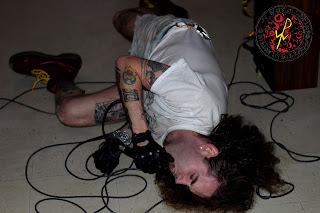 Saturday I spent the day baking and the evening we hosted a show at our space.  We had a lower turnout but it was still a lot of fun.  I was happy to see some good friends and make some new ones.  Our season for shows at our house is coming to a close soon but it has been amazing watching it grow!  So proud of what we have all done as a community. 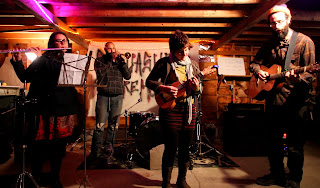 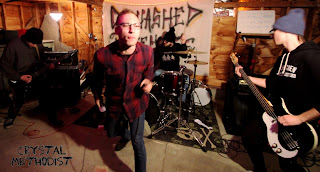 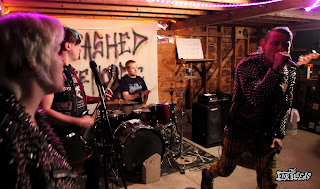 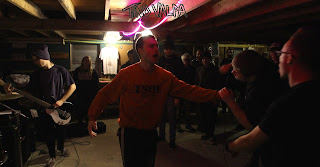 Occasionally, Ashley has to work late and Kaleigh and I have dinner without her.  We are never happy she misses dinner with us but it does allow us to eat some dishes that are not always Ashley's favorite. 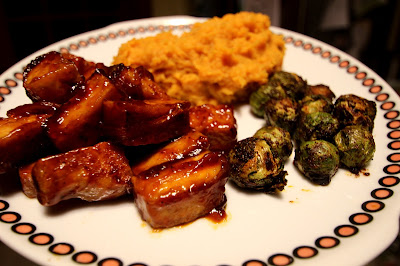 That was the circumstance last night.  Kaleigh and I opted to make BBQ tofu, a dish she and I love and often eat more than we should.  We had mashed sweet potato and roasted brussel sprouts as our sides.  We both ate two plates full and were stuffed.

Ashley got home just before bedtime and we heated her up a plate.  It is not her favorite but she still appreciated the meal after a 12 hour day.
at 9:51 AM No comments:

With the changing of the seasons, we are working on a new private chef menu at Squashed.  Likely to be removed (temporarily) are the seasonal dishes like Ratatouille and Gazpacho for more hearty winter dishes.

One of the dishes we are considering is a second Indian dish.  Aloo Gobi is a dish I have a lot of experience making and would be an easy addition.  I am still not sold on the need for 2 Indian dishes on such a small menu but it might work. 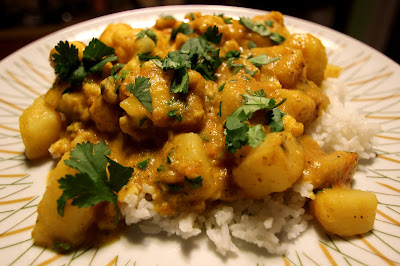 We always do our best to accommodate special orders so it might just be a dish we offer to folks who ask.  We are also considering a subscription option that I may add things from an "off the menu" list.  I am really excited to see how the business continues to progress!
at 9:11 AM No comments:

While riding home from karate class last night Kaleigh was talking about how she wanted to make something when she got home.  I always try to encourage her creativity and suggested she make a comic book.  She has been reading a lot of comics recently and thought she might like to make one.  She scoffed.

When we got home I started dinner and Kaleigh asked if she could make cookies.  I was happy to hear she would be in the kitchen with me and told her to go ahead.  She has made cookies by herself before and I figured she could do it again without issue. 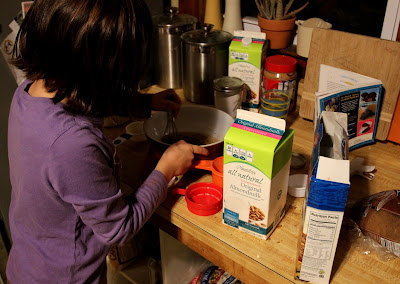 She pulled out all of her ingredients, her cookbook and I noticed that she was also making them with the gluten free flour so that Ashley could have them as well.  She is such a thoughtful child!

It took her a bit to make them but she was determined to do it without assistance.  She was deciding what to add into the cookies for flavor and opted for cranberries, chocolate chips, coconut shreds, and currants. 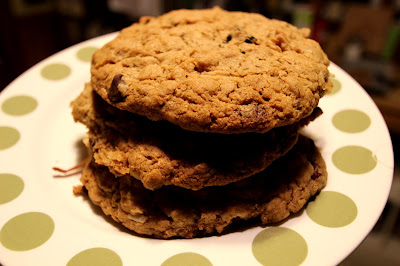 When she was adding the currants she told me that they must have been genetically modified raisins.  I corrected her but added that it as great that she was thinking about those types of things.
at 8:15 AM No comments:

Obligatory Halloween post!  It is one of the few holidays I think are kind of fun actually.  Most are a bore but Halloween has some cool stuff going on that I can get behind. 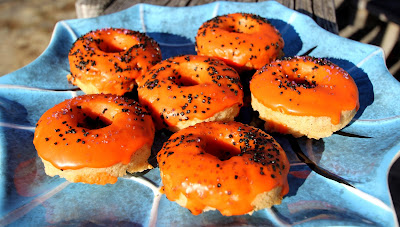 This year, Ashley made some awesome mini donut treats!  Not only were they vegan but they were also gluten free so we could all enjoy them! 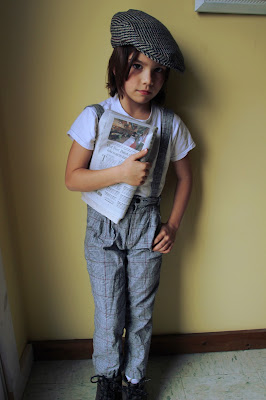 That evening, Ashley, Kaleigh, and I went to meet up with my family and trick-or-treated through my old stomping grounds!  Last year Kaleigh opted for a scary costume but this year she wanted to go as a Newsie!  The costume was awesome and there were even some older folks that greeted her at the door knowing just what she was!
at 11:18 AM No comments: