Too early for this adventure.

I had quite an adventure this morning.  As I woke up, I grabbed a quick shower, thew on an undershirt and some shorts (no belt) and headed outside to drop an envelope into the outgoing mail for tomorrow.  As soon as I shut the door behind me, I realized that I had locked myself out of my house.  No belt, no shirt, no phone, and no key.  To top it off, I had to be to work (again) in a matter of hours.

My neighbor was in his yard and I told him that I was locked out.  He informed me that he always has a hidden key around his house.  Since that advice was not really helping at the moment, he offered his phone so I could make a call.  I looked at the phone and realized that cell phones have lead me to never know any phone numbers at all.  I had no one to call.  All the while, my pants are almost falling off.

As the neighbor and I wandered around the house looking for solutions (while I was holding my pants up), I noticed a window that the lock was not fully clasped on.  He offered a credit card but it was to flimsy to push the lock.  My garage was unlocked so I poked around in there.  I spotted what I hoped would be the perfect tool. 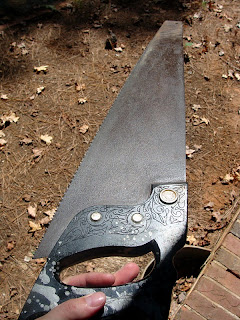 The saw was flexible enough to get up into the window but hopefully solid enough to push the remaining lock open.  After several minutes of working it over, I popped the lock open!  Thanking the neighbor, I climbed in the window, falling face first on the floor on the other side, pants still on the sill.  My first order of business?  Hide a key.  Lesson learned.


Time to eat and go to work. 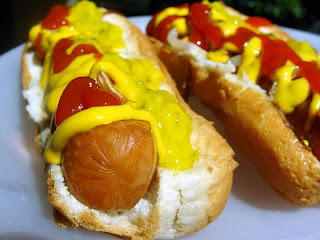 It it too early to laugh? Sounds like quite and adventure!

Good that the garage was unlocked then :-).
Have a good week.

Haha, what a way to start the day! Glad you got in. I lock myself out fairly often, but then crawl in through the cat window.

Hi Vic! Thanks for stopping by Vegan Fazool! I, too, am stopping by! I also locked myself out recently when putting an extra bag in the trash: in pajamas, no bra, no shower, no key, no anything, with my 3yo son inside the house! It worked out. :-)

See you around the 'Fo!
Dawn (Vegan Fazool)

Oy, I've done that before--definitely not a fun adventure. :( Glad you were able to break in (& without looking suspicious!). Hope the rest of your day went much more smoothly!

That sounds like something I would do! Definitely not a great way to start the day but I'm sure it'll be funny soon enough ;) An adventure is always a good way to keep you on your toes though!