A tale of a cake gone whacky.

Over the weekend, I realized I did not have a bedtime snack.  After watching a movie with Ashley, where they were eating cake, I knew what I had to do.  Pull out the bake ware and try my hand at another cake.  Always a risk in my house.

I was whipping up the batter when I spotted some green food coloring I had laying around.  Without a second thought I dumped a bit in and vigorously whipped it up.  It was that nice obnoxious green.  I tossed the cake in the oven and began to look for icing ideas.  An old store acquired can of bright pink strawberry icing, tucked far back in the cabinet, caught my eye.  Goldmine. 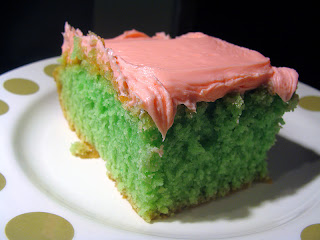 A couple hours later, I had frosted the green cake with pink icing and to be honest it looked like a carebear had exploded in my baking dish.  It was interesting.  The icing was suspect at best but who can complain about a bedtime snack this colorful?
at 3:07 PM

that's one colorful 'n tasty look'n snack! the colors actually remind me of my Strawberry Shortcake dolls i had when i was a wee one (and i had Care Bears, too. w00t!). love it!

wondering what kind of dreams you had after this cake ;-)

Haha the Care Bear description is perfect! This looks so fun and festive! It can totally pass for a Halloween cake :)