Halloween and an Ocobter recap. 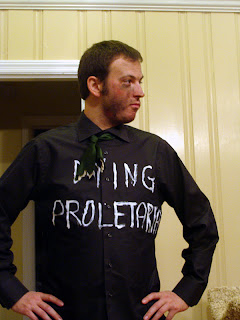 October was a strange month.  I had a long vacation, some major financial ventures, significant relationship alternations, and have been re-united with an old nemesis / friend.  It has been odd and none of it had much to do with the kitchen.

The month ended with something that I have not done in years.  Maybe even 20 years.  I went trick-or-treating.  Ashley, her sister, her sisters boyfriend and I took Ashley's daughter Kaleigh out.  Kaleigh had a great dragon costume.  Everyone seemed to think she was a boy, apparently dragons are gender specific.  I never knew.

I had a little costume of my own.  Inspired by some old punk rock song lyrics and my long hours spent at the jobby job. 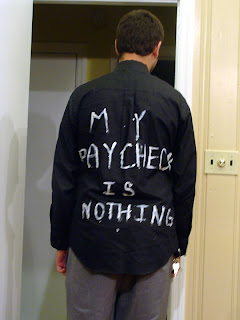 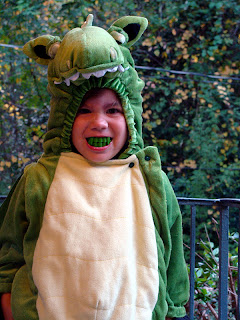 Great costumes to you and Kaleigh...yeah, who would of thought dragons had to be boys? Must have been fun to trick or treat again.

I LOVE trick or treating. I was Medusa this year (or at least I had her hair, perhaps I'll have time to do the full costume next year). My kiddo was Batman (he loves the Adam West Batman, no Michael Keaton for him!)

Love the costumes!! That is silly that people would think she was a boy because she was a dragon. Looks like you all had a blast. I hope that october was good interesting :)

My niece was an octopus for Halloween. She was SO adorable! She's really little, going to be 1 on the 15th. Very memorable first Halloween.

I remember a dragon cartoon — maybe public television — yes, Dragontales — and there were dragons both male and female. Maybe it was the spectacularly green teeth that confused people. (Just kidding!) Great costumes.

Did you get any lollies?

I am a proletarian, but not dying, for now at least... but most people think I am not (a proletarian, that is) I look too different from the historic proletarians. Still, at least I always look like a foreigner everywhere I go, even in my own country, and 'those' (foreigners) are a specie of their own :-).

Such a cute little dragon costume- One of the best I've seen, easily. :)

it's hard to discern gender on prepubescent children if they're not wearing clothing or a hairstyle that's gender typical...
also, i probably wouldn't have recognized Kayleigh as herself with the hood and the fake teeth! glad you all had a good time.