Sunday was a call out sick day at work and the day that I felt the worse this weekend. I put on my game face though, made some food and Jamie and I headed off to the November Vegan Lunch Meetup, which happened to be a potluck. Apparently, at these events, Jamie and I are still a couple, who knew? We brought potato salad, cranberry sauce, and a raw root salad. 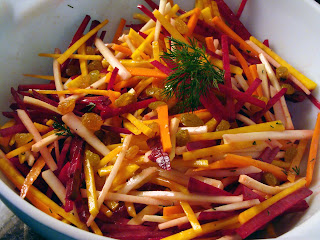 Cut the beets, turnip, carrot, and parsnip into matchstick like pieces. Put into a large bowl. You may want to separate the purple beets from the rest so that the color does not bleed as much. I would also advise cutting the purple beet first.

Gently, combine the purple beets with the rest of the roots and sprinkle on you rasians. Then drizzle the mustard dressing over the matchsticks and with you hands, gently mix evenly.

Once we got to the potluck the food began to pile up! So good. It was really fun and I can not wait to host some potlucks at my house when it is done! 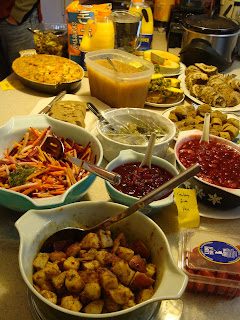 Ooh I like the sound of that! Gorgeous too

i'm so glad you posted that recipe. it was really good!

i suppose the "couple faux pas" is one of those hazards of our group. sometimes it's hard to get to know people, especially when we're at restaurants. potlucks are better as you can move around, but i still don't know most people's "business." ya know?

Vic, I was just telling my Mom (who's going vegan for health reasons) about your root salad just TODAY. Thank you for posting!

i'm sorry you weren't feeling well, but hooray for making it to the potluck! potato salad, cranberry sauce, and raw root salad all sound like awesome dishes to bring. your raw root salad is beautiful, and i can't wait to try it out. mmmmmm!